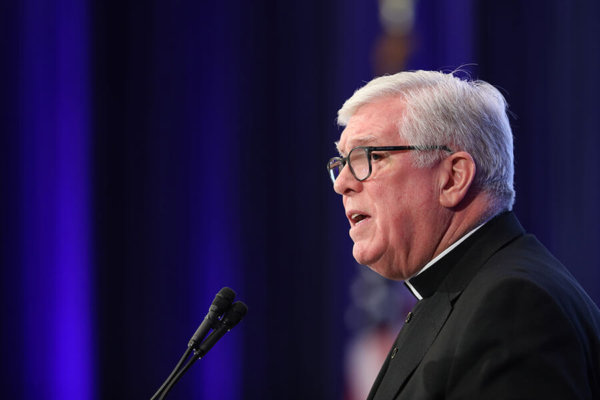 BALTIMORE (CNS) — Bishop Frank J. Dewane of Venice, Florida, said Catholic clergy and lay leaders can play a role in bringing together people along the rural-urban divide to build understanding of the need for sensible policies that can end the scourge of gun violence.

His call came during a 20-minute presentation Nov. 11, the first day of the fall general assembly of the U.S. Conference of Catholic Bishops.

Bishop Dewane, chairman of the U.S. bishops’ Committee on Domestic Justice and Human Development, outlined the USCCB’s long-held stance of the need for “common sense” legislation that governs the availability of guns. But he also said it was time for people to come together so that there is greater understanding of how gun violence affects urban communities in particular.

The bishop afterward told Catholic News Service that the USCCB’s work on the legislative front was important, but that a pastoral response to gun violence was needed.

“It’s time for a different approach,” he said.

He pointed to the need to address gun violence, which has ravaged many urban centers, while acknowledging the legitimate concerns among responsible gun owners of losing access to firearms for hunting or, in some cases, protection.

Since 1975, the USCCB has issued a series of statements and pastoral letters addressing gun violence. Individual bishops, in their capacity as chairmen of USCCB committees, have sent letters to Congress outlining the conference’s concern that lives are being needless lost because of the widening availability of guns, including military-style weapons.

However, Dewane’s call goes beyond legislative efforts and appears to open the door for church leaders to seek a common ground in addressing gun violence.

“Human life is sacred … and we need to approach this with the full strength of our teaching,” he told the assembly.

Bishop Dewane also said the USCCB is not seeking a total limit to handguns, but would welcome broader background checks and some limits on gun ownership.

Over the years, he said, the bishops have supported “common sense” actions such as an assault weapon ban, limits on large capacity magazines, a federal law to criminalize gun trafficking, mandatory gun lock and safe storage requirements, improved access to mental health services and assessment of the impact of the portrayal of violence in various media on society.

Such common sense restrictions on guns would be no different than those already in place on prescription drugs and drivers. But they also are not the full solution, he suggested.

“Such regulations are helpful, but they will not ban gun violence completely. For that to happen, we need new ways of thinking. At the heart of the epidemic is a shooter. That shooter some how in some way turns inward on pain or isolation or illusions that it becomes possible to become desensitized to others, that he loses all empathy,” he said.

The bishop urged society to look at the “danger signs in others that can lead to the loss of empathy (and see) early signs of self-inwardness.”

“As a society we have become less and less empathetic ourselves, a clear sign that we all are, to a degree, becoming dangerous.”

Bishop Dewane noted that some bipartisan support has emerged for a so-called “red flag” law, which would keep guns out of the hands of potentially dangerous people. He also said that there has been some support for mandatory background checks of new gun purchases.

In the country’s current political environment efforts to implement a federal handgun licensing program will go nowhere, he said, because of concerns by millions of gun owners that their Second Amendment rights would be violated. The bishop suggested that individual state Catholic conferences undertake efforts to support gun-related safety legislation as the opportunities arise.

The bishop also raised the possibility of utilizing the USCCB socially responsible invest guidelines to encompass the gun industry. Divestment from gun manufacturers “would send a strong signal,” he said.