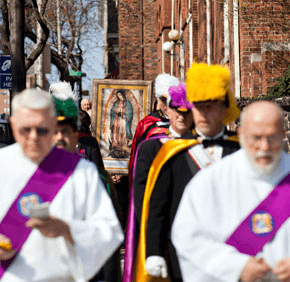 In the past month, Maryland’s Knights of Columbus sought to secure 100,000 pledges to pray the rosary.

Lawrence Grayson, Knights’ state director of pro-life activities, announced a total at the end of a pro-life Mass at the Basilica of the National Shrine of the Assumption of the Blessed Virgin Mary in Baltimore March 18, but by the following morning that number had grown. Pledged by Maryland Catholics, the rosaries are being offered throughout March for an end to abortion.

“I’m certainly aware of the power of the rosary,” Grayson said, pointing to two historic battles where the rosary is said to have aided the soldiers who prayed it – the Battle of Lepanto in 1571 and the Battle of Vienna in 1683. He called it a “weapon” to be used in times of spiritual battle as well.

“We’re fighting evil, and we have to have a weapon to fight the evil,” Grayson said. “What better than the rosary? Our Blessed Mother has told us repeatedly to say it, and if we do, she’s going to hear us.”

Catholics are called to speak out, especially for the most defenseless, Bishop Rozanski said in the homily.

After Mass, participants gathered on the basilica’s steps to process to a nearby Planned Parenthood clinic, which regularly provides abortions, according to its website.

Praying for an end to abortion and for aborted children, Deacon Mills blessed the Planned Parenthood’s doors with relics of St. John Neumann and Blessed Francis Xavier Seelos.

Gabriela Perdomo, 18, and her brother, Thomas, 10, walked arm in arm as they recited the prayers. A few steps away, their parents, Federico and Valeria, both 49, slid rosary beads through their fingers.

They attended the Mass and procession together to show support for the pro-life movement, said Valeria, who pledged 20 rosaries to the Knights’ efforts at the family’s parish, Our Lady of Perpetual Help in Ellicott City.

The idea of the rosary as “weapon” resonated with Gabriela, a freshman at the University of Maryland in College Park.

“I really like that phrase,” she said. “It’s powerful, and it’s peaceful.”

But, if a national campaign gets under way, it won’t be his doing, he said. For now, he’s concentrating on bolstering the pro-life efforts of Maryland’s Knights, he said.

As for the rosary campaign, “It’s so edifying to have these folks coming in and saying, ‘It’s so important,’” Grayson said.