Serving When and Wherever Needed 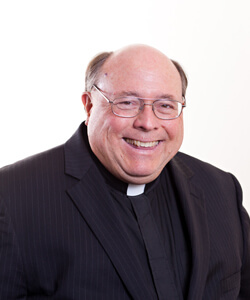 Father Gene Nickol’s priestly discernment began at an early age while attending Shrine of the Little Flower School, an elementary school affiliated with his home parish of the same name in Baltimore City. In the 9th grade, he enrolled in St. Charles College High School and its six-year seminarian studies program before matriculating to Mount St. Mary’s Seminary to complete his priestly formation.

Ordained in 1973, Father Nickol’s archdiocesan assignments have been varied. First serving as a Deacon at St. Anthony of Padua, Father Nickol then served as an Associate at St. Joseph, Fullerton and St. Agnes, Catonsville. Around the same time, he led Search Retreats, retreats for young people held at the Sparks CYO Retreat House, work for which the Archdiocese honored him the title of “Padre of Youth.”

In 1985, Father Nickol became Pastor of St. Peter the Apostle in Libertytown, a role he would take on at Holy Trinity, Our Lady of the Fields, and St. Rita parishes, for nearly 30 years.

Upon retirement, Father Nickol continued to celebrate Mass, hear confessions and anoint the sick when and wherever needed, while also enjoying reading and catching up with fellow priests.

Although the new reality brought on by the spread of COVID-19 has presented challenges, it has also afforded Father Nickol an opportunity to reconnect with his St. Charles College High School alums through weekly Zoom meetings, for which he is grateful.