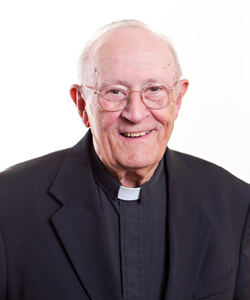 Monsignor Arthur Bastress, ordained in 1951 and celebrating his 70th year of ministry next year, grew up in Baltimore City, a neighbor of future Maryland Governor, William Donald Schaefer. Monsignor’s family belonged to St. Bernardine Parish, and he attended its elementary school from grades 1-8.

Because America was in the throes of World War II at the time he entered the seminary, Monsignor Bastress’ priestly formation was accelerated. “If there were any breaks between semesters,” he notes, “they were very short.”

Having always wanting to become a parish priest, Monsignor had his prayers answered with early assignments at St. Dominic in Baltimore, St. Patrick in Cumberland, and Holy Trinity in Glen Burnie. Later as a Pastor, he served at Immaculate Heart of Mary, St. Andrew by the Bay, St. Mary in Pylesville, St. Jerome, St. Peter the Apostle and, until his retirement in 2017, at St. Alphonsus Shrine in the center of Baltimore City, where he was celebrating Mass…in three languages!

Monsignor would not agree that he was enjoying retirement, but was “getting used to it,” leading a Rosary every Wednesday and saying a Mass when possible at Mercy Ridge where he resides. Unfortunately, the spread of COVID-19 has meant self-isolation for him and his neighbors.

Still, Monsignor Bastress sees an opportunity arising from the current crisis, just as he did during his younger days throughout World War II. He hopes that both the priesthood and society at-large can emerge from this moment more selfless, more service-oriented, and with a spirit of greater support for all of God’s children.