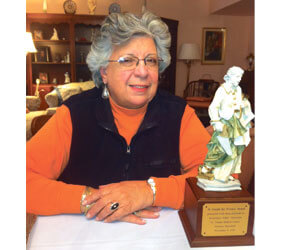 The plaque on the bottom of the resin statue award could have been easily inscribed “Libby the Worker” in place of “St. Joseph the Worker,” describing the vocation of its recipient, Rosemarie “Libby” Liberatore.

The lifelong Baltimorean, 77, has spent almost half her existence in nursing, working 30 of her 40 years in the field at St. Joseph Medical Center until retiring in 1996. Since then, she has been a seemingly tireless volunteer.

The 2011 St. Joseph the Worker Award was presented in November to Liberatore, a parishioner of the Church of the Nativity in Timonium, at the Candlelight Reception of Honor hosted by the St. Joseph Medical Foundation.

Named after the patron saint of all working people and the poor, its symbolism represents an individual who has made extraordinary contributions to St. Joseph through their faithful leadership and service.

“She’s a wonderful person,” said Dr. Marcio Menendez, medical director of St. Clare Medical Outreach, which is housed at St. Joseph. “I have been working with Libby for 11 years. She has been an inspiration to everyone – nurses, doctors, staff – because of her dedication and willingness to work.”

Liberatore, who graduated from the parish school at St. Rita, Dundalk, and The Catholic High School of Baltimore, works pro bono one day a week for the uninsured and homeless via Menendez’s outreach program.

She also volunteers for the hospital’s Foundation auxiliary, planning fundraising activities such as Casino night, the Christmas bazaar and an art auction.

Last June, she finished a nine-year term on the St. Joseph Medical Center Foundation’s board of directors. She currently serves on the board of directors at Catholic High, and is president of the homeowners association in her Timonium neighborhood.

“To me, I don’t think I do anything different than anyone else,” she said, sitting at the dining room table in her tidy townhome after fetching a plastic container of homemade Italian “pizzelle” from the kitchen. “I’ve always been a supporter of the institution (St. Joseph) – I’ve been involved with it since age 18.”

The second-generation Italian remains close to a batch of classmates she befriended at the former St. Joseph Hospital School of Nursing; they graduated in 1955. Annually, they travel and/or cruise together on various vacations.

“Well … when someone isn’t having a knee replaced,” she joked.

In her spare time, Liberatore enjoys dining out, cooking, attending opera and theater, visiting her condo on Fenwick Island, Del., and watching football and baseball.

Does the black and orange clothing she donned mean she’s an Orioles fan?

“Is the pope Catholic?” she responded.