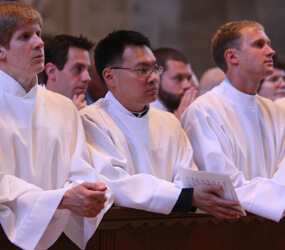 It was after daily Mass at St. Louis in Clarksville when Monsignor Joseph L. Luca asked a young communicant if he had ever considered becoming a priest.

The faithful parishioner was embarking on a career as an engineer. He seemed a bit surprised by his pastor’s question, but the seed was planted.

Twelve years later, Christopher de Leon entered St. Mary’s Seminary and University in Roland Park to begin his first year of study to become a priest for the Archdiocese of Baltimore. The support of his pastor and faith community helped him answer the call to religious life, he said.

De Leon’s story is a familiar one at the Howard County parish.

Counting the recent ordination of Father Ernest W. Cibelli, there are seven active archdiocesan priests who hail from St. Louis. In recent years, three others were ordained priests for religious communities and another was ordained a priest for another diocese. Three women from the parish have taken vows in religious orders and six men were ordained to the permanent diaconate.

There are currently three men from St. Louis studying to become archdiocesan priests, two men in formation to become deacons and one high school student who is discerning a call to become a Xaverian Brother.

“I really believe there are vocations in every parish,” Monsignor Luca said. “It’s a matter of cooperating with God’s call and being encouraging.”

At every Mass at St. Louis, petitions are offered for religious vocations and adoration of the Blessed Sacrament on the weekends is focused on vocations. Positive modeling of what it means to be a priest is an important component for attracting young people, Monsignor Luca said.

“When they see a joyful priest being so central and integral to the lives of the people around them – being with them in times of joy and times of sadness – that attracts them,” he said.

Monsignor Luca said the priests of his parish make an effort to show an interest in young people and foster healthy relationships.

“They know the priest not as a distant figure at the altar on Sunday, but someone they personally know,” he said. “It’s in that personal relationship that vocations are born. It’s not drudgery to promote vocations. It’s a joy.”