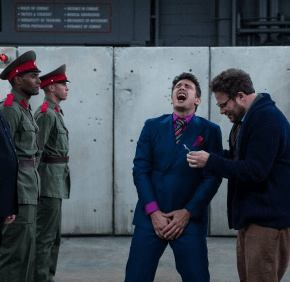 Most of the world has heard about the movie “The Interview,” which was the supposed reason behind the hacking of Sony’s computer network. Even if you hadn’t planned to see the film, it would have been hard to avoid media coverage of the hack, and the decision by theaters and Sony Pictures Entertainment not to show the movie. The studio subsequently decided to release the movie in select cinemas and on a variety of other platforms.

I admit: I have not seen “The Interview” and have no intention to see it. Seth Rogen, who is connected with a host of bad-taste projects, co-wrote, co-directed and co-stars in the film. Having seen the trailers, I decided that this kind of insipid movie wasn’t my cup of tea. And I don’t need to see this movie to make a statement in support of freedom of speech, as some have claimed it’s our patriotic duty to see a movie that a dictator wants to suppress.

Rogen plays Aaron Rapaport, producer of a fictional celebrity tabloid TV show, “The Skylark Report,” hosted by Dave Skylark (James Franco). It turns out that one of their biggest fans is North Korean despot Kim Jong-Un. When they land an interview with the communist leader, the CIA enlists the pair in a plot to assassinate the leader. One must assume hijinks follow.

Since the TV show is a fictional corollary to media outlets such as TMZ, why not have created a fictional country and dictator? Satire can work well when the target is disguised – even thinly – to allow the audience to imagine the characters and situations. Was it naiveté not to expect some fallout from such a film, or was it hubris, designed to garner publicity for a bad movie? The oppressive regime in North Korea shouldn’t have been used as a backdrop for this satire.

The joke may have backfired, leading to the hack of Sony – and worse, it could block a serious discussion about the limitations of freedom in countries around the world. Open Doors International in January released its annual World Watch List regarding Christians around the world who face worsening mistreatment, noting that “Africa saw the most rapid growth of persecution, while the Middle East saw targeted attacks, resulting in a mass exodus of Christians.”

These days, when we think of religious persecution, we often think of Christian minorities in Muslim countries, who may experience great trials and tribulations. While those are acknowledged by Open Doors, they are not the only countries on the list. North Korea tops the list for the 13th year in a row on the list of the 50 countries where religious persecution is most extreme. “The god-like worship of the leader, Kim Jong-Un, and his predecessors leaves little room for any other religions and Christians face unimaginable pressure in every sphere of life. Meeting with other Christians is virtually impossible. Anyone discovered engaging in unauthorized religious activity is subject to arrest, arbitrary detention, disappearance, torture and/or execution,” the report said.

When global persecution of Christians is horrendous and getting worse, oppressive regimes are no laughing matter.