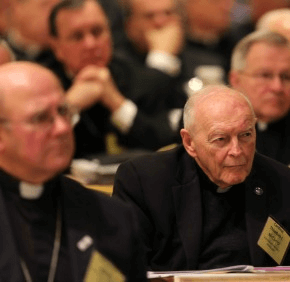 By Carol Zimmermann
Catholic News Service
BALTIMORE – The ongoing work of the U.S. bishops to defend religious freedom will take a slightly different tone in upcoming years, said its committee chairman.
Archbishop William E. Lori of Baltimore, chairman of the Ad Hoc Committee for Religious Liberty, told the bishops the committee – extended for another three years – planned to focus more on teaching and expanding networks with Catholic lay groups and interfaith and ecumenical partners.
He said the committee would provide a “clearinghouse function” providing resources as religious liberty issues arise.
The archbishop noted that new committee members would include “fewer lawyers” and more experts in the communications field to help get the bishops’ message across. It also would include bishops from relevant committees.
One of the committee’ hallmarks has been the annual Fortnight for Freedom, a 14-day campaign of prayer and special events focusing on religious liberty issues. The 2015 fortnight will emphasize the 50th anniversary of the Second Vatican Council document on religious liberty, “Dignitatis Humanae.” Archbishop Lori said it will provide a “great opportunity to teach about religious liberty and evangelize about it.”
“Stay tuned for details,” he told the bishops, adding that the campaign also will be linked to works of charity and service to people in need.
Regarding challenges to religious liberty, the archbishop said there are “some old and some new.”
He said the committee will continue to monitor the U.S. Department of Health and Human Services’ contraceptive mandate that is part of the Affordable Care Act.
“There are more than 100 cases to watch. It keeps us busy,” he said.
The committee also is looking at laws that redefine marriage and tracking new proposed legislation requiring health insurance coverage of abortion.
“Religious liberty continues to be of great concern to us all,” he said, adding that it might seem that the struggle is a “daunting task.”
“We approach this as people of faith, as spiritual leaders who love our church, who love our people, who love our country,” he said.
Also see:
Liturgical items top agenda at USCCB meeting in Baltimore
Sharing perspective, despite depression’s efforts to steal it away
Copyright (c) 2014 Catholic News Service/U.S. Conference of Catholic Bishops
PrevNext