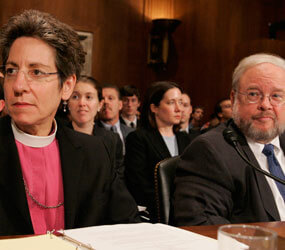 WASHINGTON – The degree to which religiously based organizations push for change in Washington will likely always be open to debate and differing interpretations, but the truer measure may be their effectiveness, even in the midst of a cranky Congress dealing with cash-short coffers.

It may astound some to think there are 212 faith-based groups that have a presence in Washington, and that 41 of them are Catholic in their orientation – although just how Catholic some of them are could be one area of dispute.

A bigger point was the outlay by these groups, as calculated by the Pew Forum on Religion & Public Life in a study released Nov. 21, “Lobbying for the Faithful: Religious Advocacy Groups in Washington, D.C.” One bone of contention is that many groups would say their work is not lobbying, but advocacy. Another is the definition of advocacy.

The combined total for all 212 groups – at least those whose public financial statements could be examined by a team led by Allen Hertzke – was $390 million for 2009, the last year for which data could be obtained and which represented a slight downtick of $14 million from the presidential election year of 2008. Hertzke, a Pew visiting senior research fellow from 2008 to 2009, teaches political science at the University of Oklahoma.

The biggest expenditure – nearly $88 million – was by the American Israel Public Affairs Committee, which could lead to another line of argument. While some may contend that AIPAC is not a religiously based lobby, Hertzke said, its goal of the preservation of Israel as a Jewish state would qualify it.

Ranked second by Pew was the U.S. Conference of Catholic Bishops, at $26.66 million. In a footnote, Hertzke said that the figures for the USCCB, “whose mission includes more than advocacy, is for the group’s ‘policy activities’ expenses. The conference’s total operating expenses were more than $143 million in 2009.”

One panelist at a Nov. 21 Pew symposium on the report, National Organization for Marriage founder Maggie Gallagher, said that absent such an explanation, “I’d wonder how the USCCB spends $26 million.”

But the number drew a stern rebuke from Mercy Sister Mary Ann Walsh, the USCCB’s director of media relations.

In a Nov. 22 blog posting on the USCCB website, she lit into Pew’s calculations.

“The USCCB does engage in government relations – not in electioneering – and has three full-time staff assigned to the task. None of them hands out money and the cost of their efforts reaches nowhere near $26 million,” Sister Mary Ann said. “The entire cost of salary and benefits for the entire USCCB staff, in Washington, Miami, New York and Rome, is $29 million, somewhat more than the $26 million Pew claims USCCB pours into lobbying/advocacy.

“If Pew were right, there’d be no funds for USCCB’s central efforts in evangelization, liturgy, helping the poor, educating Catholics, doctrine and canon law.”

In a Nov. 30 telephone interview with CNS, Sister Mary Ann said she has sent a copy of her blog posting to Pew and has “had a conversation with them.” The response, she added, was that “it’s a broad interpretation of the word ‘advocacy,’“ noting that every USCCB expense not related to administrative and pastoral line items was considered advocacy by Pew. Sister Mary Ann said work was being done to offer a lower, more accurate figure to Pew.

Tony Spence, CNS director and editor-in-chief, took issue with CNS being lumped in with USCCB advocacy efforts, and urged Pew to fix the study.

“Pew’s assumption that Catholic News Service is part of the USCCB’s advocacy work is simply a wrong one,” Spence said in a statement. “The USCCB does not fund the activities of this news service. CNS does not now, nor has it ever in its 92-year history, engaged any kind of advocacy work. Our mission is to report fully, fairly and freely on the church and society. News reporting is not advocacy, it’s journalism.”

Catholic Relief Services, the bishops’ international relief and development agency, also has a bone to pick with the Pew report, which ranked the agency 19th on the list and said it spent $4.67 million in 2009 on advocacy efforts.

However, according to John Rivera, CRS’ communications director, CRS reported $800,000 in advocacy expenses on its last federal form. “We didn’t spend $4.6 million lobbying,” Rivera said. “We all do a little bit of advocacy work – 10 percent of our time – because we support everyone in the agency,” he added.

The remaining funds are “connected more to fundraising than advocacy,” Rivera said, but “they are maintaining it is (a) legitimate (number) in that we are educating our people.”

In a Nov. 28 email reply to Rivera’s complaint provided to CNS, Hertzke said, “In the case of CRS, we faced a difficult choice, because your self-reported ‘advocacy’ expenditures – just under $300,000 out of a total budget of more than $800 million – appeared to reflect a much narrower definition of advocacy than we have used in our report. Your ‘public awareness’ expenditures seemed to be a better fit with our definition and more consistent with the figures we chose for other international relief groups.”

Hertzke acknowledged in the email that the Pew study “adopts a broad definition of religious advocacy,” but noted that “we sought to apply this broad definition as consistently as possible” across the 212 groups identified, and that “we sought to be as transparent as possible about our decision rules and the choices we made” since “other researchers might want to apply different definitions or make different choices” in assembling a survey methodology.

Not every group has a dispute with Pew’s numbers. The report cited Jesuit Refugee Service/USA as having the 10th-largest percentage increase in advocacy expenditures from 2008 to 2009 – an increase of $86,773, or 30 percent jump.

Christian Fuchs, the organization’s spokesman, said that without knowing how Pew crunched the numbers, the increase may be largely attributable to himself. “The communications department here started in late 2008, so that that might be why there was a big jump,” he said. “Before I got here there was no communications, except for what people were doing on their own, and in working through the Jesuit Conference,” Jesuit Refugee Service/USA’s sponsor.

But Fuchs cited two examples of his agency’s success in influencing public policy.

“We’ve always pushed for continued educational support or Bhutanese refugees in Nepal, and because of that the State Department has provided education beyond what was provided before we got there,” he said. About 50,000 have been resettled, “about half of the total refugee population there,” Fuchs added, “and a lot of that is due to us pushing for it to happen.” Children in the camps learn English, “and that makes it easier for them to settle in a third country” Fuchs said.

And “our advocacy for Colombian refugees in Panama has brought more international attention to their situation,” he added. “And, finally (in November), the Panamanian government after more than 10 years was offering permanent residency to some of those refugees. That’s a good sign.”

Sister Simone Campbell, a Sister of Social Service who leads Network, the Catholic social justice lobby, pulled up audited numbers – down to the penny – on her computer that were more than $100,000 below Pew’s figure of just under $1 million. But she said Network got bang for its bucks.

“Oh absolutely, absolutely,” Sister Simone said. “Our ‘Mind the Gap!’ campaign which we’ve been doing this year has had a lot of traction on the Hill.” The campaign looks at the income disparity between most Americans and the super-rich.

“We can’t take credit for Occupy,” she added, “but I think we’ve changed the conversation.”