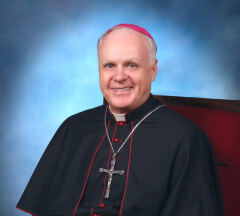 Gibbons, Shehan and Keeler are names synonymous with the history of Catholicism in Baltimore. The only Cardinals to head this historic Archdiocese over its long and storied history were each recognized for his own unique gifts and service to the Church. Vastly different men separated by years and the challenges of their day, all three were united in their shared love for the Church in Baltimore.

While the circumstances of my joining their ranks in the College of Cardinals are quite different, I am proud to claim as my own their one commonality.

Last week, our Holy Father announced during his weekly Angelus message at St. Peter’s Square that I was being named to the College of Cardinals.

Though I had received notice a few days prior to the announcement, hearing my name (along with my good friend Cardinal-designate Dolan of New York) read by the Pope from his window high above the large crowd assembled below was a momentous and exhilarating experience and elicited from me conflicting emotions.

While it was not a surprise given my new position in Rome, the timing was quite unexpected. Traditionally, new Cardinals have received their red hats in November and thus I had expected the announcement to come after my successor in Baltimore had arrived.

As it was, the timing could not have been better as it afforded me the opportunity to receive this special recognition while still at the helm in Baltimore! As I said in my official statement at the time of the announcement, I believe this honor is the result of the great collaboration and zealous faith that I have so consistently experienced while serving the Church in Baltimore. I view it also as an affirmation of the good things we have accomplished together – clergy and laity alike – all done for the glory of God and for the promotion of the faith we so eagerly share with others.

Therefore, I humbly accept this honor and willingly share it with you, dear readers, and so many others who share our bonds of faith. I am grateful to the many people who throughout my many years of service to the Church have taught me the meaning of selfless service to Jesus, his Church and to all God’s people.

Though I remain in Rome much of this month, I do look forward to my return to Baltimore and to resuming my role as Apostolic Administrator until my successor arrives (no news on that front at present).

I equally look forward to continuing my service to our good priests of Baltimore and all the faithful in liturgies and other Archdiocesan parish, school and other events.

While I know that many will be unable to be physically present at next month’s consistory in Rome, know that all of you will accompany me in prayer during my special step of pilgrimage in the Lord’s service. And I hope that I will be with you in your prayers, as well.