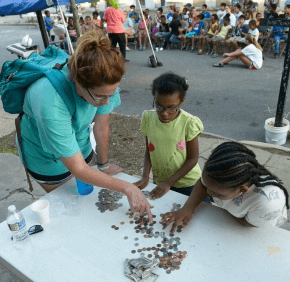 By Erik Zygmont
ezygmont@CatholicReview.org
Twitter @ReviewErik
Fourteen months after the death of Freddie Gray Jr. and the unrest in its wake, a large portion of the effort to better West Baltimore is coming from the community itself.
“We try to keep the kids busy and keep active in the community,” explained Spiritan Father Honest Munishi, pastor of St. Edward.
His parish is one of several local churches and ministries that have formed the Harlem Avenue/Rosemont Community Interfaith Coalition. The group held its second annual Dare to Care summer camp June 27-30, offering faith- and community-related activities on the 2800 block of Harlem Ave. and a daytrip to Woodberry Crossing Farm in Parkton.
According to Muriel Rice, a volunteer and parishioner of St. Edward, 64 children showed up for the final block party June 30.
“It’s not just about the children,” she said. “It’s the adults in this neighborhood coming out to eat something, too.”
“When there’s trash or work needing to be done, they’re working as hard as anyone else,” she added.
Throughout the camp, Rice gave the children presentations on African-American history. On the final day, she reviewed Baltimore’s black churches, including the Orchard Street United Methodist Church, the city’s oldest African-American-built church.
Leslie Howard, president of the Harlem Avenue Improvement Association, which is part of the Interfaith Coalition, called the summer camp “wonderful.”
While last year’s camp was mostly Christian associations, he said, this year the event included presentations from Jewish and Muslim speakers, as well as adherents of his own religion, the Baha‘i faith.

Mylai Harris makes her way through an obstacle course as part of the fun and games during the 2nd annual Dare to Care interfaith summer camp on Harlem Avenue in West Baltimore June 30. St. Edward Church was one of several area churches, ministries, and community groups hosting the event. (Kevin J. Parks | CR Staff)

According to Howard, the summer camp emerged from separate events held by Arthenia LeFlore, of One Heart, One Way Ministries, and the Rev. Willie E. Ray, founder of Save Another Youth and pastor of New Promiseland Community Church. Both LeFlore and Rev. Ray live on Harlem Avenue.
“Rev. Ray was doing an event, and Arthenia was, too, and I said, ‘Let’s put them together,’” Howard said. “After the thing with Freddie Gray, it snowballed and others wanted to get involved.”
According to Rev. Ray, behind the initiative is the concept of unity: “One corner, one church, one community,” he said. “That’s really what this is all about.”
He added that he hoped the summer camp and the collaboration that birthed it would become “a pilot project for the whole entire city – getting churches together with basic community organizations. That’s how you diffuse the anger, the resentment and the boredom, and give them alternatives.”
Elder Magnus Mindley of the Historic Rehoboth Church of God in Christ Jesus Apostolic added that his church would continue to participate “until Jesus comes.”
“We are hoping and praying that young ones will be able to adapt the message of our ministry and be partakers of this great message to love one another, love their neighbors, and stay out of drugs, trouble and violence,” he said.
It’s a goal embraced by more than the local churches. White Memorial Presbyterian Church in Raleigh, N.C., brought several high school girls to help in the effort.

“Last year, our church sent a group up here to participate in this same event,” explained Genevieve Brooks, director of middle school ministry for White Memorial. “We had a great time, and the (Interfaith) Coalition invited us back.”

Knocking on doors in West Baltimore to inform residents of the summer camp, Brooks said, was “beautiful and heartbreaking at the same time.”
“God is clearly at work here, and it has really been a privilege to come and witness and add our gifts to this community, and to see such compassionate and generous community leaders doing beautiful work,” she said.
The children enjoyed the camp, too.
“I like it because we’re learning more about Jesus,” said Mylai Harris, a young parishioner of St. Edward.
The event marked a summer in full swing and, according to Father Munishi, an improvement over last year.
“So far, so good,” he said, of the church’s surroundings. “The summer is the time when you really have problems. This summer, we’ve had only one incident; last summer was worse.”
To see more photos from Dare to Care summer camp, click here.
See also:
Service went above, beyond
‘You’re leaving?’ Archdiocesan officials offer perspective on clergy re-assignments
PrevNext