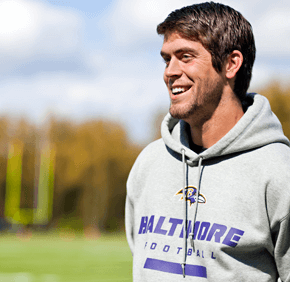 Ravens rookie kicker Justin Tucker shares his thoughts on faith and continuing to do everything to prove the Ravens coaches and front office staff right this season. (Tom McCarthy Jr. | CR Staff)|

Texas native Justin Tucker grew up rooting for the Dallas Cowboys. But as America’s Team visits Charm City for game six of the NFL season Oct. 14, the Ravens rookie with the signature strong leg will be all about purple and black.

“It going to be fun,” said the 22-year-old University of Texas graduate. “I look forward to the opportunity and to the challenge. Obviously now my allegiances have changed and I am a 100 percent Ravens fan.”

Since he joined the Ravens this season, Tucker, who is Catholic, has earned points for both his kicks and his personality. Teammates have described the six-foot-tall, 180-pound kicker as fun-loving, goofy, “good weird,” a live wire and silly.

“He’s outgoing – that is a fact,” said one Ravens PR official.

“I would describe him a good kicker first of all,” said coach John Harbaugh during an Oct. 10 press conference at the Under Armour Performance Center in Owings Mills. “That’s probably the number one criteria. That’s why he fits in the locker room because the guys appreciate his talent.”

Tucker’s talent extends beyond the field as he unabashedly proclaims himself in the top five of his teammates in the game of cornhole, which is played regularly in the locker room.

“When I go back home to Texas, no one can beat me,” he said as he stood on the Ravens practice field dressed in a grey Ravens sweatshirt and black shorts, leggings and Nike shoes. “I’m definitely top five. You know, I’m a contender.”

“I mean the guy sings Italian opera in front of our players,” Harbaugh said. “So if you’re an Italian opera person that’s probably pretty normal. A lot of our guys they see it a little different in the football culture. But we love him. He’s ours.”

Tucker says his teammates are a good group of guys.

“Everybody seems to have a smile on their face at any point in the day,” he said. “I think that’s why we’re good on the field too. We have fun playing football.”

He said he’s more excited than nervous on the field.

“Not a lot of people get to do what we do so I’m taking everything in stride and really appreciating it,” he said.

Underneath his good humor, Tucker also has a strong faith life. Raised Catholic, Tucker can be seen blessing himself before every kick, a practice he began in his high school playing days.

Tucker said he’s of the school of thought that people should be able to believe what they want.

“I like the Golden Rule just as much as anyone else,” he said. “You know just be cool with everybody and hopefully they’ll be cool back.”

The brown-haired, blue-eyed kicker, who has put 11 out of 12 kicks through the uprights this season, said he thinks it’s one of the coolest things the Ravens do to offer both a Catholic Mass and a chapel service at the hotel each week before the games. Father Christopher Whatley, pastor of St. Mark in Catonsville, celebrates Mass for the home games.

Tucker, who looks at spirituality and religion as a conscious choice and an effort as opposed to an obligation, also recounted a particularly poignant moment when he was just 11.

“I was in fifth grade and my best friend at the time passed away in a plane crash,” he said. “That was my first experience really with the death of someone I was close to. A verse in the Bible mentions child-like faith and I really experienced it. I try to carry that same feeling with me every new day. In a sense, I’m thankful for my experiences through that. It’s really kind of an opportunity to grow in faith.”

Tucker is also a family guy and is looking forward to his parents, his girlfriend and her parents visiting for this weekend’s Dallas game (“Happy Birthday, Amanda!” he says) and to two sisters attending the Texans game the week after.

“I’m a big believer because of my experience growing up, that the family that prays together stays together,” he said. “And we like to have fun too.”

Tucker’s mom, Michelle Tucker, said that as an ardent Catholic, it warms her heart to no end that her son is able to celebrate Mass before each game.

“What a gift that is and what a gift this entire Ravens NFL program is that they offer that to their players,” she said.

When it comes to the faith the Ravens front office and coaches had in him at the start of the season, Tucker said he’s happy.

“All I can do is keep trying to prove them right,” he said. “I think that’s the attitude everyone has. You know, bring your lunch pail to work, keep your hard hat on, keep your nose down to your work, and as long as you do that, I think it’ll be alright.”