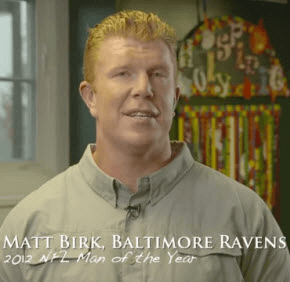 Ravens center Matt Birk urges Maryland voters to vote “no” on ballot Question 6, which seeks to redefine marriage in the state, in a new ad campaign launched by the Maryland Marriage Alliance.

“Marriage is, and should remain, between a man and a woman,” Birk says in a video launched on YouTube Oct. 5. “Gay and lesbian couples already receive benefits in Maryland, like hospital visitations, state health benefits and tax benefits. We don’t need to redefine marriage. Vote against Question 6.”

“We applaud Matt’s decision to speak out and support marriage as a union between one man and one woman,” said Derek McCoy, chairman of the Maryland Marriage Alliance. “Matt’s views are held not only by the vast majority of Catholics, but also by most Americans.”

The Maryland Marriage Alliance is a coalition to protect traditional marriage within Maryland. Among its coalition members is the Maryland Catholic Conference, which advocates for public policy on behalf of the state’s bishops.

“We believe that Matt’s message will resonate with Maryland voters,” said Mary Ellen Russell, executive director of the Maryland Catholic Conference. “He, like most Americans, believes that marriage between one man and one woman is the foundation of a stable society and gives children the best chance of being raised by a mother and father.”

A Harvard graduate and veteran center, Birk was named the 2012 NFL Man of the Year. Since moving to Baltimore, the married father of six has participated in the annual Maryland March for Life.

A Catholic, Birk appeared in similar ads in his native Minnesota, where he played for the Minnesota Vikings from 1998-2008. Minnesota is voting on a constitutional amendment defining marriage as an institution between one man and one woman.

“If we allow genderless marriage to be made law, the implication is that the contributions of part of the community, either men or women, are somehow insignificant or less valuable,” he said in a Minnesota ad launched Sept. 29. The Minnesota Catholic Conference sponsored the ad.
In a Sept. 31 op-ed in Minneapolis’ Star Tribune, Birk, 36, expressed concern about same-sex marriage’s effect on children who are not raised with a mother and a father.

“The union of a man and a woman is privileged and recognized by society as ‘marriage’ for a reason, and it’s not because the government has a vested interest in celebrating the love between two people. With good reason, government recognizes marriages and gives them certain legal benefits so they can provide a stable, nurturing environment for the next generation of citizens: our kids,” he wrote.

“Ideas have consequences, and laws shape culture,” he added. “Marriage redefinition will affect the broader well-being of children and the welfare of society. As a Christian and a citizen, I am compelled to care about both.”
Those who oppose same-sex marriage are not “bigots” or “homophobic,” he said.

“A defense of marriage is not meant as an offense to any person or group. All people should be afforded their unalienable American freedoms. There is no opposition between providing basic human rights to everyone and preserving marriage as a sacred union of one man and one woman,” he wrote.

Birk also emphasized that not all NFL players think same-sex marriage should be legal.

His remarks come in the wake of a controversy that erupted when Emmett C. Burns Jr., a Democratic member of the Maryland House of Delegates, asked Ravens owner Steve Bisciotti to silence Ravens defender and same-sex marriage advocate Brendon Ayanbadejo on the issue in September. The Ravens stood behind their teammate’s right to free speech.

In his op-ed, Birk said that he, like the NFL, supports his colleague’s right to free speech, but that the freedom of speech is not the same as the freedom for same-sex couples to marry.

In February, Maryland lawmakers passed a measure to allow same-sex marriage in the state. In March, it was signed into law by Gov. Martin O’Malley. Under its provisions, same-sex couples would be permitted to marry beginning Jan. 1, 2013. Opponents of the law collected enough signatures to put the issue on the ballot for the Nov. 6 election, so Maryland voters will decide if the law takes effect.