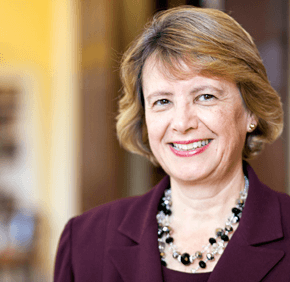 By Maria Wiering
mwiering@CatholicReview.org
Bag lunches in tow, about six students took part in a noontime discussion at Notre Dame of Maryland University Sept. 17 about the NFL, Ray Rice, and domestic and dating violence. The conversation was passionate, said Melissa Lees, the university’s campus ministry and service director who organized the event with the residence life and athletics departments.
The students, she said, are eager to boost awareness in their community about the issue.
“Education is power, and education is knowledge,” said Lees, who volunteers with TurnAround, an organization that provides counseling and support services to sexual assault and domestic violence victims in the Baltimore area.
The Notre Dame event tapped into a national conversation that began its crescendo Sept. 8, when surveillance footage appeared on YouTube of Ravens running back Rice punching unconscious his then-fiancée, now wife, Janay Palmer, in an Atlantic City casino elevator in February.
By mid-September, nearly 9 million people had watched the video.
The footage prompted Rice’s release from the Ravens and indefinite NFL suspension. It also thrust domestic abuse into the spotlight.
According to the National Coalition Against Domestic Violence, 85 percent of domestic abuse victims are women, and women ages 20-24 are at the greatest risk of nonfatal intimate partner violence.
Women at Notre Dame of Maryland seeking to help abuse victims have a stalwart ally in the university’s new president, Marylou Yam, whose research on domestic abuse shaped her transition from nursing to academia. Taking charge of the university this year, she hopes to be part of the university’s domestic violence awareness efforts, she said.
Yam is also among area professionals advising the Archdiocese of Baltimore as it launches a domestic violence awareness training program for pastoral leadership.
A registered nurse with a doctorate in nursing science, Yam’s research has focused on domestic abuse victims and the nursing profession’s response in emergency room situations.
As a young nurse at a Catholic hospital in the Bronx, she encountered battered women and sensed they needed more than medical attention. One particular woman with black-and-blue eyes motivated her to act.
“That’s when I started to think, ‘What’s next?” she said. “I hadn’t learned about it (domestic violence) as a nursing student. …. I started to read whatever I could find about it.”
Right response
The archdiocese’s initiative against domestic violence is several years in the making, said Lauri Przybysz, the archdiocese’s Marriage and Family Life coordinator and a member of the archdiocesan Family Peace Action Team.
Przybysz was part of the U.S. bishops’ task force on domestic violence, which looked to organizations including Baltimore’s House of Ruth and Esperanza Center for advice on a Catholic response to the problem.
Inspired by programs in other faith-based organizations, including Baltimore’s Jewish community, the archdiocese paired with the Archdiocese of Washington to develop resources for pastors and parish leaders to address domestic violence and help victims.
Some abuse survivors say they felt pressure from their faith or church leaders to work harder on their relationships or not leave their spouses. Przybysz hopes the archdiocesan outreach ensures victims seek safety and help.
“Part of our initiative is to help them (faith leaders) be first responders so that they won’t say something like, ‘Why don’t you come in and we’ll have couples counseling?’ That’s not what we say. We don’t recommend couples counseling to someone who’s being beat up. That could even make her more in danger,” Przybysz said.
“All Catholics need to be aware of the proper response of what Christ would do, and help that person and refer them to someone who can help them,” she added.
The archdiocese’s training is not mandated, but offered on a volunteer basis.
In 2002, the U.S. bishops released “When I Call for Help: A Pastoral Response to Domestic Violence Against Women,” calling for “a moral revolution to replace a culture of violence.”
The document stated that the church can play a role in breaking cycles of abuse. “Many abused women seek help first from the church because they see it as a safe place,” it said. “Even if their abusers isolate them from other social contacts, they may still allow them to go to church.”
Archbishop William E. Lori and the Family Peace Action Team are encouraging clergy and pastoral leaders to observe National Domestic Violence Awareness Month in October. They suggest leaders attend an interfaith training day Oct. 1, as well as preach a homily or write a pastoral letter on the topic. They also are encouraging parishes to include intentions related to domestic violence and family peace in the Prayers of the Faithful and take a collection to benefit domestic abuse, especially Oct. 25-26, Maryland’s statewide domestic violence awareness weekend.
Worldwide problem
In her research, Yam discovered that many women didn’t think their nurses could help them. As a nurse educator, Yam taught students to work with, not for, the victims by sharing resources, not telling them what to do. That approach empowers the survivors and acknowledges their courage and strength, she said.
Yam would like to see education on conflict resolution and healthy relationships begin with children in elementary school and extend into high school, she said.
When Yam became a nursing educator at St. Peter’s University in Jersey City, N.J., she wrote curricula for nursing students to help them respond to domestic violence victims. Domestic abuse education is now prevalent in nursing schools, including the school of nursing at Notre Dame of Maryland, the United States’ oldest Catholic women’s college.
Yam wants the university’s students to be able to recognize relationship “red flags” and know where to get help. She also wants to correct common misperceptions, including the ideas that domestic violence only affects women of low socioeconomic status or always involves substance abuse.
“We know this is a worldwide health problem,” she said. “It cuts across all socioeconomic and racial, cultural lines.”
Also see:
Beyond the Bell: Catholic High robotics team raises the bar
Parishes offer new twist on ‘date night’
PrevNext