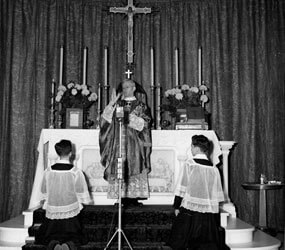 Jesuit Father James Casciotti has two words to explain the success of the weekly Radio Mass of Baltimore: “live” and “local.”

“We hear all the time that people appreciate the fact that it’s happening at the same time they are listening,” said Father Casciotti, director of the Radio Mass since 2005. “When they tune it, they are really united with prayer that’s going on right then. They aren’t just listening to a taped show.”

The Radio Mass of Baltimore will celebrate its 65th anniversary of continuous live broadcasts Oct. 2. The popular ministry has expanded in recent years – adding a website and allowing listeners to access the program from across the globe. Within a year, leaders hope to add a television simulcast.

Jesuit Father Joseph Dougherty came up with the idea for a weekly Radio Mass, winning support from Archbishop Michael Curley in 1946. During the broadcasts, Father Dougherty provided English translations of the Latin liturgy at a separate microphone as Catholic worship was sent over the airwaves from Mercy Hospital in downtown Baltimore.

Today, the 30-minute program is heard every Sunday at 9:30 a.m. on WBAL-1090 AM. On the Radio Mass’s website, www.radiomass.org, users can listen to previously broadcast homilies, download written copies of those homilies and access Radio Mass newsletters.

There is a devoted group of volunteers who lector, sing at Mass and provide other support every week, according to Father Casciotti, who said financial donors have also been generous.

Father Casciotti said the Radio Mass has been a special blessing to the sick and shut-ins who can’t get to Mass.

“It’s a virtual community long before we had that term,” the priest said.