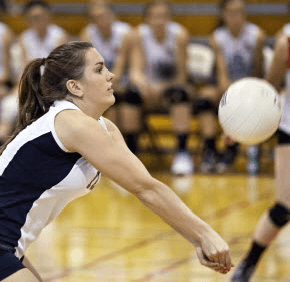 SEVERN – Kristen Seeba has been swimming since age 3, then developed an interest in volleyball in elementary school, watching older sister Colleen in matches at Archbishop Spalding High School.

“I love it,” said Seeba, an Archbishop Spalding senior. “It’s so much fun. I love team sports, just working together.”

The 5-foot-8-inch setter and outside hitter was on the school’s volleyball team, which recently reached the Interscholastic Athletic Association of Maryland (IAAM) A Conference finals. The Cavaliers won the championship in 2011.

Seeba, 17, also plays for Velocity, a year-round club volleyball team she has been on since middle school.

Now that swimming season is here, Seeba will focus on the 50-yard freestyle for Spalding. The Cavaliers’swim team opens its season Nov. 30. She also swims for the Whitehall Pool and Tennis Club’s Wahoo’s in the summer.

In the spring, Seeba played varsity softball as a sophomore.

A solid student, Seeba has a 4.0 GPA, has taken advanced placement and honors courses and is a National Honor Society member.

She is considering majoring in pre-med.

Seeba was one of a dozen students and teachers from Spalding who went on a weeklong mission trip to Haiti last summer.

“It was the best experience of my life,” Seeba said, “just to be able to see outside of my own view of the world.”

A extraordinary minister of holy Communion at Archbishop Spalding, Seeba is a parishioner of Ascension Catholic Church in Bowie. She attended St. Pius X Regional School in Bowie for elementary and middle school. Her Catholic schooling deepened her faith.

“I learn new things about my faith every day,”Seeba said.

Scott Rombach, who coached the Seebas in volleyball, said Kristen “is the quiet leader on the court, the lead by example type.”

“Her faith and her ability to be confident in her faith really goes a long way in our school as a leader,” he said.