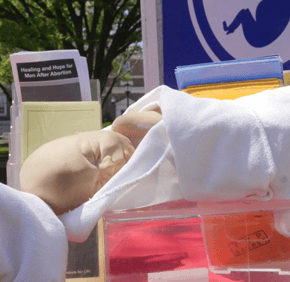 Those were the words a student-led university committee used in describing a fetal development display when it told the North Baltimore Pro-Life Study Group it would not be permitted to use the three-dimensional models at a booth at this year’s Johns Hopkins University Spring Fair April 24-26.

Following protests from the NBPLSG and the Johns Hopkins Voice for Life, the committee reversed its decision – allowing the display to go forward as it has for more than 30 years.

“Our goal with the display is very simple,” said Andrew Guernsey, a junior at Hopkins and president of Johns Hopkins Voice for Life. “It’s to show a window into the womb.”

Guernsey said he was shocked that “scientifically accurate” information was initially banned from being shared on the campus that bears the name of one of the world’s leading medical schools.

“The real question the Spring Fair ban raises is, ‘Is science still welcome on the Hopkins’ campus?’” said Guernsey, who is also active in Catholic campus ministry at the school.

Johns Hopkins Voice for Life was a co-sponsor of the NBPLSG application to have a display at the Spring Fair.

Sheila Wharam, secretary of the NBPLSG and a parishioner of St. Joseph in Cockeysville, said this was the first year the Spring Fair’s Arts and Crafts Committee has tried to ban the use of the fetal display. When she applied to participate in the Spring Fair, she received an e-mail from the Arts and Crafts Committee notifying her that a changed policy required all vendors to have displays pre-approved. The committee then rejected the use of her display and invited her to submit an alternative display or participate in the fair without a display.

In an April 13 e-mail to Wharam, the committee said its intention was “not to restrict your freedom of speech or expression, but rather to create an inclusive and respectful environment for all.”

In an April 14 e-mail to Guernsey after reversing its decision, the committee wrote that its members “were wrong in our initial decision and, upon further reflection, have decided we will not impose restrictions on the displays presented by any community groups at Spring Fair.” The committee said it “values free speech.”

In addition to trying to educate women about the scientific facts about developing fetuses, Wharam said the group provides information at the fair on support available to women who have had abortions.

“We are trying to show that the unborn child is a fellow human being and more than just a clump of cells,” Wharam explained.

Although some students threatened to stand in front of the display to block anyone from seeing it, the first day of the fair proceeded into the afternoon without incident.

Guernsey said the controversy is part of a larger trend on college campuses where leaders “think students have a right to be protected from views they find disagreeable.”

He called it a “struggle” to bring a “message of love and life to the Hopkins campus that seems to be increasingly intolerant.”

Young adults at helm of the fight for life

Lesson of Special Olympics is ‘all life is beautiful,’ Shriver says