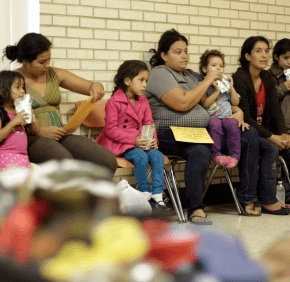 By Archbishop William E. Lori
The Catholic Church, including here in the United States, has a long history of serving immigrants. Through parishes, Catholic Charities and various Catholic religious communities of men and women, the church has been a haven and a source of Christian love, providing newcomers with basic necessities for sustaining human life as well as assistance with assimilating in their new home.
This is especially true here in Baltimore – home to the oldest Catholic diocese in the nation and the second-largest seaport during the height of the immigration boom – where the Catholic Church often provides basic human services to those fleeing their native homelands in search of safety, food, work and the freedoms we too often take for granted. The church views this work as an important part of our mission of upholding the dignity of every human person, made in God’s image and likeness.
Thus, it was no surprise that Pope Francis responded to the arrival to the United States of so many unaccompanied immigrant children by placing the highest priority on their care and protection. “Such a humanitarian emergency demands as its first measure the urgent protection and properly taking in of the children,” the Holy Father said.
The care and protection of these children is why our Catholic Charities here in the Archdiocese of Baltimore intends to offer its expertise and services to support some of these children through its residential facility in Timonium. St. Vincent’s Villa, designed to provide children such services, began as an orphanage for immigrant children 174 years ago and now serves children with behavioral and emotional needs.
Catholic Charities also operates Esperanza Center, located in the heart of Baltimore City’s Spanish-speaking community, which provides, among other services, English, computer literacy, citizenship classes and community services, as well as medical and dental care and legal services to more than 5,500 of our new neighbors each year.
As well, Esperanza Center has offered fingerprinting services and family reunification assistance to more than 225 sponsors of and/or unaccompanied children just since May 1. The combination of Catholic Charities’ experience, expertise and mission-inspired zeal makes the agency well-equipped to provide the kind of care our Holy Father rightly says should be our greatest concern.
This proposal, not surprisingly, has not been embraced by everyone. In spite of the fact that a significant number of these children could qualify for refugee protection according to U.S. and international law, some people focus only on their legal status. These children are being sent here by their parents from places such as Honduras, El Salvador and Guatemala, which have the first-, fourth- and fifth-highest murder rates in the world. The United States, among the world’s leaders in advocating for the protection of human rights, often asks nations to accept refugees – such as Lebanon and Jordan, where 2 million Syrians, including many Christians, have fled for their lives.
How, then, can our nation simply return 60,000 children to their persecutors? Whether one thinks these children should be in our country or not, the reality is they are here and need to be humanely cared for as long as they continue to be with us.
The debate over our country’s broken immigration system is not a new one and the U.S. Catholic bishops have consistently supported calls for comprehensive immigration reform. Our offer to provide humanitarian care to children in need should not be construed as an alternative response to the policies and conditions that have led to this crisis.
We applaud the pope’s call for the international community to address the root causes of the current crisis, including violence and endemic poverty, and we reaffirm the church’s commitment to immigration reform in the United States.
The current humanitarian challenge is a test of the moral character of our nation. This is not a time for political posturing, but a chance for bipartisan cooperation to address this issue humanely. As the global leader of human rights protection, we must not fail.
To read more of Archbishop Lori’s columns, click here.
PrevNext