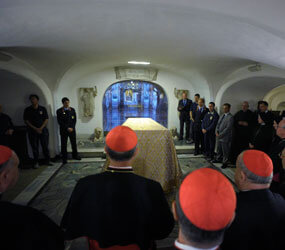 VATICAN CITY – Pope John Paul II’s tomb was opened and his casket removed in preparation for veneration after his beatification May 1.

During a brief ceremony April 29, top Vatican officials and a handful of the pope’s former aides sang a litany in the grotto of St. Peter’s Basilica as the pope’s casket was placed temporarily before the tomb of St. Peter, in an area closed off to visitors.

Among those participating were Sister Tobiana Sobodka and six other Polish nuns who served the late pope in the papal household.

The casket, which was covered with an embroidered gold cloth, was to be moved to a spot in front of the main altar on the basilica’s upper level on the morning of May 1, so people can pray before it after the beatification Mass. Then it will be moved to a new tomb site in the chapel of St. Sebastian, located on the main floor of the basilica.

The inscribed marble slab that covered Pope John Paul’s original tomb will be sent to Krakow, Poland, where it will be placed in a new church dedicated to Blessed John Paul, the Vatican said.

Vatican officials said the three-layer casket would remain unopened during the beatification and the veneration. The pope’s body lies inside a coffin made of cypress wood, surrounded by another coffin of lead, which is covered by a third wooden coffin.

The relic for the beatification Mass, a vial of the late pope’s blood, will be carried to the altar in a silver reliquary by Sister Tobiana and French Sister Marie-Simon-Pierre, whose cure from Parkinson’s disease was accepted as the miracle that paved the way for Pope John Paul’s beatification.

At a press briefing in the Vatican press office April 29, Jesuit Father Federico Lombardi, the Vatican spokesman, announced a new beatification page at www.vatican.va that includes a multimedia tribute to Pope John Paul II, featuring more than 500 photographs and excerpts from papal texts in six languages.

Vatican officials also said they had created a team of “digital sentinels,” Catholics of every age who have volunteered to bring the witness and teaching of Pope John Paul to the Internet, especially through Facebook and Twitter.

Their efforts were to focus on the beatification events, but will continue afterward. The Vatican said about 1,000 journalists and opinion leaders were ready to follow their live Twitter feed, and 3,000 people on Facebook were involved in the “sentinel” groups.

The Vatican said the vigil on the eve of the beatification in Rome’s ancient Circus Maximus racetrack would feature the recital of the luminous mysteries of the rosary, an innovation of Pope John Paul II, in a video link-up with five Marian sanctuaries around the world.

The Diocese of Rome said eight major churches in the center of the city will be open all night for pilgrims who wish to pray. The Vatican planned to open St. Peter’s Square at 5:30 a.m. the morning of the beatification.