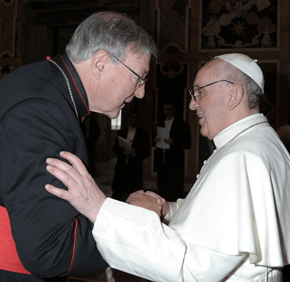 By Carol Glatz
Catholic News Service
VATICAN CITY – Pope Francis told his new economic oversight council that it must be “courageous and determined” in its critical role of helping the church not waver from its real mission of bringing the Gospel to the world and helping those most in need.
The church has a duty to use its assets and manpower responsibly in promoting its spiritual mandate, and “a new mentality of evangelical service” must take hold throughout the Vatican, the pope said May 2.
The pope’s comments came the same day the new Vatican Council for the Economy met for the first time since the pope established the council in February.
The council is an international group of eight cardinals and seven lay experts appointed to set policies for the administrative and financial activities of all Vatican offices and bodies.
The council “has the task of supervising economic activities and monitoring the structures and administrative and financial activities” of the Vatican’s various offices and agencies, the pope said.
He thanked members for their work so far, adding that “we need it.”
Pope Francis told the council members that they play a critical role in his larger efforts of reforming the Roman Curia so it may “better serve the church” and the pope.
“This is a notable challenge that calls for devotion and prudence,” as well as “courage and determination,” since the process “will not be simple” or easy, he said.
The pope said he established the council and the related Secretariat for the Economy because of “the church’s awareness of its responsibility to protect and carefully manage its assets in light of its mission of evangelization with particular attention to those most in need.”
“We must not waver from this path. Everything, transparency, efficiency, everything has this as its aim,” he said.
The secretariat, headed by Australian Cardinal George Pell, will have authority over all economic and administrative activities within the Holy See and Vatican City State as it implements the policies determined by the council.
The pope thanked Cardinal Pell for “his efforts, his work and for his Australian rugby-like tenacity,” referring to the sport the cardinal played professionally as a young man.
The pope said, “The Holy See feels called to enact this mission, taking into special account its responsibility toward the universal church. Furthermore, these changes will reflect the desire to enact the necessary reforms of the Roman Curia” so that it can better serve the church and the pope.
He said he appointed cardinals and laypeople who would represent the different parts of the world and “contribute their experience for the good of the church.”
The seven laypeople, who are experts in the fields of business, management and finance, are full members of the council, he said. “They aren’t second-class citizens. No, no. Everyone is on the same level” as their counterpart cardinal members, he emphasized.
“The council’s work carries great weight and great importance and will offer a fundamental contribution to the service carried out by the Roman Curia and the various administrative offices of the Holy See,” he said.
The council’s cardinal members include U.S. Cardinal Daniel N. DiNardo of Galveston-Houston. The council is headed by German Cardinal Reinhard Marx of Munich and Freising, Germany. Cardinal Marx also is a member of the pope’s Council of Cardinals, an eight-member group advising him on the reform of the Roman Curia and the governance of the church.
See also:
Pope to greet new commission on abuse prevention as it meets first time
Pope Francis: Fun, not money should rule sports; athletes must be good models
Copyright (c) 2014 Catholic News Service/U.S. Conference of Catholic Bishops
PrevNext