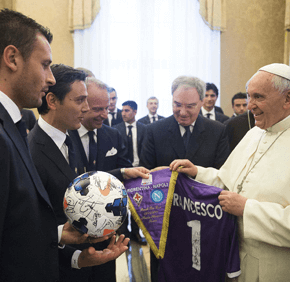 By Carol Glatz
Catholic News Service
VATICAN CITY – Soccer-fan Pope Francis urged professional athletes to always be sportsmanlike on and off the field because so many people, especially kids, look up to them.
The pope also said he wished all sports could be about celebration, not money and big business, which risk “tainting everything.”
The pope made his remarks during an audience May 2 with the top two ranking Italian major league soccer teams and representatives of an Italian soccer federation.
The audience came the day before the two teams — Fiorentina and Napoli — were to hit the pitch in Rome and vie for the Italian Cup championship title May 3.
The pope, who has been a lifelong supporter of the San Lorenzo soccer team in Buenos Aires, Argentina, said he has “wonderful memories” of going to the stadium. Watching games with his family members reflected some “joyous moments on Sundays,” he recalled.
“I hope that soccer and every other popular sport could recover the sense of celebration.
“Today, soccer, too, is immersed in a world of big business, with advertising, television, etc.,” he said.
“But the economic side must not prevail over sports because it risks tainting everything at the international, national and local levels,” he said.
People at the top of the sports industry need to be proactive, “restoring dignity” to sporting events, he said.
But soccer players and other pro-athletes have enormous responsibility, too, he said.
“You are at the center of attention and many of your fans are young, very young; keep this in mind, think about how your behavior” both good and bad, speaks volumes and influences others, he said.
“Always be true sportsmen,” he added.
The pope explained that sports have important educational value because they contribute to personal growth, highlight the harmony of body and spirit, foster social development and promote the values of “solidarity, loyalty and respect.”
“May soccer always develop this potential,” he said, adding that he hoped the next day’s championship would be “a wonderful celebration.”
The delegates visiting the pope gave him soccer balls and team jerseys signed by the players.
One of the players to greet the pope was a former player on the San Lorenzo team who now plays for Fiorentina.
The future pope played basketball when he was young, and was a longtime card-carrying member of the San Lorenzo soccer team.
When he was cardinal of Buenos Aires, he lamented that the fan scene had deteriorated since his youth.
At the worst, “people would yell at the referee that he was a bum, a scoundrel, a sellout … nothing in comparison to the epithets they use today,” he said in a book of interviews titled, “Pope Francis: Conversations with Jorge Bergoglio.”
See also:
Pope to greet new commission on abuse prevention as it meets first time
Papal friendship began with soccer, led to improved Catholic-Jewish ties
Copyright (c) 2014 Catholic News Service/U.S. Conference of Catholic Bishops
PrevNext