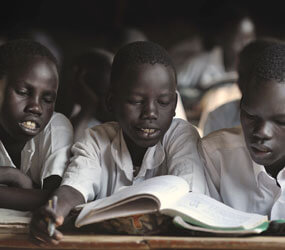 VATICAN CITY – In his document on the church in Africa, Pope Benedict XVI addressed the educational crisis on the continent, calling high illiteracy rates “a scourge on par with that of pandemics.”

“True, it does not kill directly, but it contributes actively to the marginalization of the person – which is a form of social death – and it blocks access to knowledge,” the pope said.

He noted that the educational crisis is not limited to Africa but is a worldwide problem. Africa, however, suffers more than other continents, with a literacy rate of less than 60 percent, according to international agencies.

The pope made the comments in a document “Africae Munus” (“The Commitment of Africa”), signed Nov. 19. The document, which presents the church’s role in the future of Africa, expanded on themes from the 2009 Synod of Bishops for Africa, including education.

The pope called for the development of educational programs that rely on both faith and reason to prepare children for adulthood.

He said it was important for students to be educated in the faith and to gain an understanding of the church’s social doctrine since religious education institutions “train children in the African values that are taken up by those of the Gospel.”

He said bishops in Africa have a responsibility to provide schooling for children.

“This is a matter of justice for each child and, indeed, the future of Africa depends on it,” the document said.