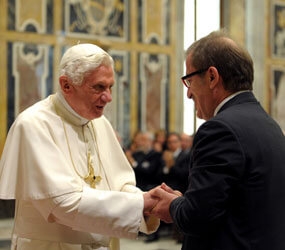 VATICAN CITY – In the midst of major economic problems and continuing moral scandals, Italy’s prime minister was facing a confidence vote in parliament as Pope Benedict XVI called on Italian public officials to exercise their offices with dignity and responsibility.

The pope met Oct. 14 with Roberto Maroni, Italy’s interior minister, and about 200 prefects, who represent the interior ministry in Italy’s provinces and have special competence in matters dealing with public order.

The prefects recognize St. Ambrose as their patron saint; the fourth-century saint was a government official before being named bishop of Milan. The pope said St. Ambrose believed temporal authority was delegated by God for the good of humanity.

For that reason, civic leadership “has an almost sacred character,” the pope said. “Therefore, it must be exercised with great dignity and a deep sense of responsibility.”

Pope Benedict told the prefects that their role is to protect the weakest members of Italian society, which is a task that is more important and more difficult in “the present circumstances of social and economic uncertainty.”

In fact, at the exact moment the pope was meeting the officials, the lower house of Italy’s parliament was engaged in a debate set to precede a confidence vote in the government of Prime Minister Silvio Berlusconi, who has been at the center of a sex scandal and has been beset by legal problems.