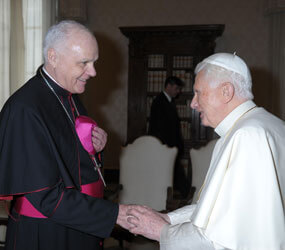 Cardinal-designate Edwin F. O’Brien, apostolic administrator of the Archdiocese of Baltimore, discussed the state of the Baltimore archdiocese with Pope Benedict XVI and Vatican officials during a series of meetings in Rome Jan. 16-21.

The discussions were part of an “ad limina apostolorum” visit to the Vatican, usually held every five years. The name comes from the Latin for “to the thresholds of the apostles.”

The bishops of Maryland, Delaware, Virginia, West Virginia, the U.S. Archdiocese of Military Services, the District of Columbia and the Virgin Islands participated in the gathering.

In a Jan. 19 telephone interview from Rome, Cardinal-designate O’Brien told The Catholic Review that when the pontiff saw the Baltimore leader, Pope Benedict noted that Baltimore was the first diocese established in the United States.

“He was very well aware that Baltimore was the birthplace of Catholic education (in the United States),” Cardinal-designate O’Brien said. “He acknowledged the struggles, but he encouraged us to stay strong because it has meant such a great deal to our country.”

In a move to strengthen Catholic education in Maryland, the Baltimore archdiocese consolidated 13 Catholic schools in 2010 and introduced new educational programs.

“He’s such an easygoing man,” Cardinal-designate O’Brien said, “and he’s truly interested in the church in our country and in each of our dioceses.”

Cardinal-designate O’Brien noted that the pope was aware of specific challenges faced in the various dioceses.

He asked Wilmington Bishop W. Francis Malooly about the finances of the Wilmington diocese, which has declared bankruptcy. The pope was also concerned about the shortage of military chaplains, Archbishop O’Brien said, and wondered whether it would be possible to have NATO priests assist as chaplains in the U.S. Military.

As part of the visit, a special report of approximately 200 pages was prepared by the archdiocese and sent to Rome at the end of November. It contains statistical information and other summaries of the state of the archdiocese, touching on demographic shifts, parish planning, Catholic education and more.

Vatican leaders reviewed the document “very carefully,” Archbishop O’Brien said, “and they seemed to be quite satisfied with the activity and the vibrancy” of the archdiocese.

Among the Vatican congregations the Baltimore delegation visited included the Congregation of Bishops and the Congregation for the Doctrine of the Faith. Auxiliary Bishops Mitchell T. Rozanski and Denis J. Madden participated in the ad limina visit.

“We had a good discussion on evangelization,” Archbishop O’Brien said, “and there was a great deal of enthusiasm for the pope’s letter on the door of faith.”

Pope Benedict XVI has declared Oct. 12, 2012 to Nov. 24, 2013 to be the “Year of Faith,” and the Congregation for the Doctrine of the Faith released a note Jan. 7 outlining ways bishops, dioceses, parishes and communities can promote the faith.

“There will be a lot of planning between now and next October in our country and in our diocese to renew the faith throughout the church among those who are Catholic but who would like to deepen their faith in Christ and the church.

“It’s a real retreat for us to be together and a group and encourage each other and to be reassured by the leaders of the church – and especially by the pope.”

Cardinal-designate O’Brien joined other bishops in venerating the tombs of Ss. Peter and Paul during the visit.

“The spiritual side of it can’t be overlooked,” he said. “We have a special grace of guidance and intercession on their part.”

Cardinal-designate O’Brien was to give a press conference in Baltimore Jan. 25 upon his return to the United States.