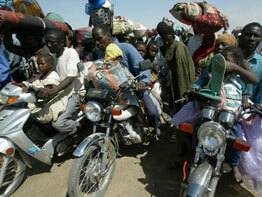 VATICAN CITY – Pope Benedict XVI appealed for an end to violence in Chad and for dialogue to replace the use of arms.

He asked people to join him in prayers for “these brothers and sisters who suffer, asking that they may be spared further violence and that needed humanitarian aid be guaranteed.”

The pope made his appeal at the end of his Feb. 6 general audience in the Vatican’s Paul VI hall.

Intense fighting broke out between rebel forces and government troops in Chad’s capital of N’Djamena Feb. 2. The two-day battle left hundreds of people dead, up to 1,000 others wounded and more than 23,000 people displaced, according to local aid workers.

Rebels, who have agreed to a cease-fire, want to overthrow the country’s president, whom they say has had a violent and corrupt regime.

Pope Benedict said his thoughts and prayers were with the “dear people of Chad” who have been “devastated by grievous civil clashes which have caused numerous victims and thousands of civilians to flee.”

The pope made “a sorrowful appeal” to all sides involved to “lay down weapons and follow the path of dialogue and reconciliation.”