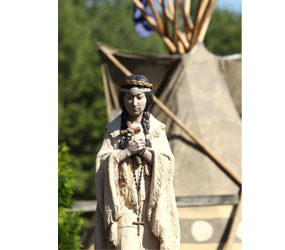 He also formally recognized the martyrdom of 64 victims of the Spanish Civil War and advanced the causes of 18 other men and women.

During a meeting Dec. 19 with Cardinal Angelo Amato, prefect of the Congregation for Saints’ Causes, the pope signed the decrees recognizing the miracles needed for the canonizations of Blesseds Marianne and Kateri.

Before a date is set for the canonization ceremonies, there must be an “ordinary public consistory,” a formal ceremony opened and closed with prayer, during which cardinals present in Rome express their support for the pope’s decision to create new saints.

Blessed Marianne, who worked as a teacher and hospital administrator in New York, spent the last 30 years of her life ministering on the Hawaiian island of Molokai to those with leprosy. She died on the island in 1918 at age 80 and was beatified in St. Peter’s Basilica in 2005.

Blessed Kateri, known as the Lily of the Mohawks, was born to a Christian Algonquin mother and a Mohawk father in 1656 in upstate New York along the Hudson River. She was baptized by a Jesuit missionary in 1676 when she was 20, and she died in Canada four years later. In June 1980, she became the first Native American to be beatified.

Pope Benedict also recognized miracles attributed to the intercession of five other people, who now can be declared saints. They are:

– Blessed Giovanni Battista Piamarta, an Italian priest who founded the Congregation of the Holy Family of Nazareth for men and the Humble Servants of the Lord for women. He died in 1913.

– Blessed Jacques Berthieu, a French Jesuit priest who was martyred in Madagascar in 1896.

– Blessed Carmen Salles y Barangueras, the Spanish founder of the Sisters of the Immaculate Conception. She worked with disadvantaged girls and prostitutes and saw that early education was essential for helping young women. She died in 1911.

– Blessed Peter Calungsod, a lay Catholic from Cebu, Philippines, who accompanied Jesuit missionaries to Guam as a catechist and was martyred there in 1672 while he was in his late teens.

– Blessed Anna Schaffer, a lay German woman who wanted to be a missionary, but couldn’t do so after a succession of physical accidents and disease. She accepted her infirmity as a way of sanctification. Her grave has been a pilgrimage site since her death in 1925.

– He recognized the martyrdom of 64 priests, religious and a layman, Jose Gorostazu Labayen, who were martyred between 1936 and 1937 during the Spanish Civil War.

– He recognized the martyrdom of Father Nicolaus Rusca, a Swiss priest who was tortured and killed after being condemned by a Protestant court in 1618.

– He formally recognized the miracle needed for the beatification of Father Louis Brisson, the French founder of the Oblates of St. Francis de Sales.

– He formally recognized the miracle needed for the beatification of Italian Father Luigi Novarese, an official at the Vatican Secretariat of State and founder of the Silent Workers of the Cross Association.

– He formally recognized the miracle needed for the beatification of Mother Maria Mole, the French founder of the Sisters of Charity of St. Louis.

– He formally recognized the miracles needed for the beatifications of two nuns, one from Argentina and one from Italy.

The pope approved seven other decrees recognizing that the men and women lived the Christian virtues in a heroic way and that they are venerable. Recognition of a miracle attributed to each candidate’s intercession is needed for that person’s beatification.