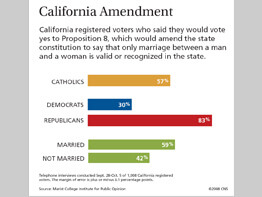 NEW HAVEN, Conn. – A majority of likely voters in California favor a proposed constitutional amendment stating that only marriage between a man and a woman is valid or recognized in the state, according to a new poll commissioned by the Knights of Columbus.

Groups most likely to oppose Proposition 8 were Democrats (63 percent said they were opposed), Independents (54 percent), those under 45 (54 percent), single people (54 percent) and college graduates (50 percent), according to the poll results.

The survey was conducted by telephone Sept. 28-Oct. 5 among 1,008 registered voters in California. The margin of error was plus or minus 3.1 percentage points.

Same-sex marriages have been permitted in California since June, after the California Supreme Court ruled in May that sexual orientation “does not constitute a legitimate basis upon which to deny or withhold legal rights.” Californians voted in 2000 to allow marriages only between opposite-sex couples, but the high court’s ruling overturned that.

The Knights, based in New Haven, recently agreed to fund a new campaign of the U.S. Conference of Catholic Bishops aimed at promoting the unique nature of marriage and defending its status against moves to redefine marriage through legislatures or the courts.

The survey, made public Oct. 21, found that 52 percent of likely voters said they thought the California Supreme Court was wrong to overturn the 2000 referendum results, while 42 percent said the court’s action was right and 6 percent were unsure.

Asked whether they thought the definition of marriage should be determined by judges or by California voters, 72 percent said voters should have the final word, 15 percent said it should be left to judges and 13 percent were undecided.

The survey respondents also were presented with various scenarios that could follow passage or failure of Proposition 8 and asked whether that possibility would make them more or less likely to vote for the proposed constitutional amendment.

About half (49 percent) of likely voters agreed with the statement, “Same-sex marriage should not be law if priests, ministers and other clergy who believe the Bible allows for marriage only between a man and a woman will not be able to legally marry these couples in their place of worship without risk of lawsuits or loss of their tax-exempt status.”

Forty-three percent said they believed “same-sex marriage should become law, so gay and lesbian couples may have the same rights as other couples through marriage,” and 8 percent were undecided.