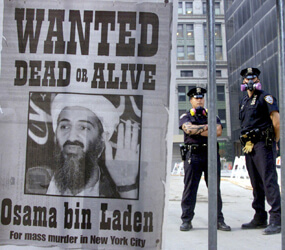 WASHINGTON – Whenever a nation’s leader dies in office, conspiracy theories abound as to what – or who – caused the death.

No one can forget the first U.S. presidential assassination, of Abraham Lincoln by John Wilkes Booth, or the involvement of German Lutheran clergyman Dietrich Bonhoeffer in a failed plot to kill Adolf Hitler as World War II was raging.

When the plane carrying the presidents of Rwanda and Burundi crashed in 1994, ethnic Hutus blamed Tutsis for downing the plane, setting off a wave of genocide.

After President John F. Kennedy was assassinated in 1963, suspicion turned to communist Cuba as being behind the killing when it became known that presumed assassin Lee Harvey Oswald once visited there. It was later disclosed that Kennedy and the CIA had toyed with using the Mafia to do away with Cuban leader Fidel Castro.

That’s the issue behind the recent revelations of a since-canceled CIA program to track down and kill al-Qaida leaders – a program that had been kept hidden from Congress.

The CIA was authorized in 2001 to use lethal force against a small group of top al-Qaida leaders. The CIA attacked terrorist camps using pilotless aircraft. The newly disclosed plan to deploy teams of assassins to kill senior terrorists was legally authorized by the administration of George W. Bush; it involved operatives “striking at 2 feet instead of 10,000 feet,” according to an intelligence official quoted by The Washington Post.

In 1975 and 1976, a Senate panel known as the Church Committee – named for its chairman, Democratic Sen. Frank Church of Idaho – published a series of reports on U.S. intelligence activities including alleged abuses of law and of power. Among the matters investigated were attempts to assassinate foreign leaders – including Patrice Lumumba of Congo, Rafael Trujillo of the Dominican Republic, brothers Ngo Dinh Diem and Ngo Dinh Nhu of Vietnam, and Gen. Rene Schneider of Chile – as well as the Kennedy-Castro tangle.

With the CIA’s latest assassination program, questions arise as to how it would be viewed through the prism of the Catholic moral tradition on just-war theory.

“In a duly constituted war, anybody on the front lines is fair game,” said Margaret O’Brien Steinfels, co-director of the Fordham University Center on Religion and Culture and the Jesuit-run New York school’s journalist in residence.

But “it seems to me that Mr. Bush’s declaration of a war on terror is of dubious legality and dubious morality, as well as that it’s a war that seems to have no clear endpoint, as long as you can name people who are potential terrorists or actual terrorists. This is a war that can go on forever,” Steinfels added in an interview with Catholic News Service. “I have never seen an argument that says that the war on terror is a legitimately justly declared war.”

Steinfels noted, “There’s a lot of congruence between just-war theory and international law and the Geneva Conventions. And I think in many ways they draw on the same moral observations. Warfare is such a serious state for any society to get into that it really requires high barriers for justification. And even in the course of war there has to be rules that govern the behavior of those people with weapons of mass destruction and of limited destruction.”

David L. Perry, who concluded a six-year stint this year as ethics professor at the Army War College in Carlisle, Pa., wrote in the spring 1995 issue of the Journal of Conflict Studies: “Just as it is not a crime to kill the enemy during wartime, so too should it not be regarded as a crime or a morally reprehensible act when a nation, acting in concert with its obligation to protect its own citizens from harm, seeks out and destroys terrorists outside its borders who have committed, or are planning to commit atrocities on its territory or against its citizens.”

“The assassin in effect acts as prosecutor, judge, jury and executioner combined; the target is precluded from being represented by counsel before an impartial court,” added Perry, who earlier lectured in philosophy and religious studies at Jesuit-run Santa Clara University in California. “These concerns suggest that assassination ought only to be used as a last resort.”

“The (9/11) attacks seemed more akin to criminal activity,” said Robert F. Ladenson, a member of the philosophy department at the Illinois Institute of Technology, in a 2002 “Ethics Bowl” essay.

“Nevertheless,” he continued, “the U.S. government took the position that it would not distinguish between the terrorists involved in the Sept. 11 attacks and the governments that give them refuge.”

“In response to proposals to lift the ban on assassinations and to relax CIA policies on the recruitment of informants, the organization Human Rights Watch wrote a letter to President Bush urging him to maintain these policies as they are,” he noted.