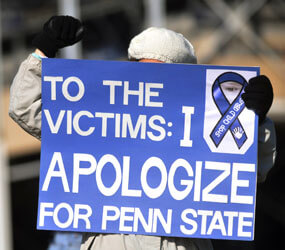 LEVITTOWN, Pa. – The child sexual abuse crisis at Penn State University brings into focus the harsh reality that the problem is pervasive in U.S. society, according to experts in the field and church officials.

Former defensive coach Jerry Sandusky has been charged with sexually assaulting eight boys over a 15-year span. Other college officials have been indicted for a failure to respond appropriately to reports that Sandusky was seen engaging in sexual behavior with children recruited through his connection with a children’s charity.

The school fired football coach Joe Paterno, who was in his 46th year, and the university president for not doing enough to act on reports of the alleged abuse.

Linda L. Dunlap, a psychology professor at Marist College in Poughkeepsie, N.Y., said if the 84-year-old Paterno had “just been some coach at some college somewhere,” and not a coach with such a stellar reputation, the Penn State case might have made the local news, but not drawn national attention.

Such abuse of children “is not happening more with coaches than with other groups,” Dunlap said; most abusers are family members.

The news of Penn State’s problems “has reopened a wound in the church as well,” New York Archbishop Timothy M. Dolan said Nov. 14 at a news conference in Baltimore during the bishops’ fall general assembly.

“It shows the scourge (of sex abuse) is not limited to any one faith and certainly not limited to priests,” said the president of the U.S. bishops’ conference. “It’s in organizations, in universities, all over the place, in families and, yes, in priests.”

Archbishop Dolan said the church’s own sex abuse scandal “makes us a little timid about wanting to give advice – glass houses and all that.”

But he said the church’s experience with providing safe environment training to help children and their parents, as well as clergy and church volunteers, become more aware of the warning signs of child sex abuse has been “phenomenally advantageous” over the past decade.

“We’ve got a long way to go, but we have made major strides,” he said.

The church’s response – in line with the bishops’ “Charter for the Protection of Children and Young People” first adopted in 2002 and revised in 2005 and last June – focuses on reporting, putting the children’s needs first and ongoing education, Deacon Nojadera told Catholic News Service.

“Education has been absolutely key” to giving parents and children a voice, he said. “Anyone working with a vulnerable population” should absolutely know about ways to prevent abuse and how to report abuse if they suspect or witness it. “Our children should know that they are safe and protected.”

What the church specifically has to offer, Deacon Nojadera said, is that “we realized we made mistakes” in the past “and we’re learning from those mistakes.”

The church also is aware, he said, that simply acknowledging past mistakes doesn’t mean the need for action is past, or ever will be past.

“Vigilance (remains) paramount, and the call is for everyone to be vigilant in this matter.”

Bishop Blasé J. Cupich of Spokane, Wash., immediate past chairman of the bishops’ Committee for the Protection of Children and Young People, agreed that the work of the church, especially the “causes and context” study done in conjunction with the John Jay College of Criminal Justice in New York, has shown the abuse of children is a problem throughout society.

The situation at Penn State, where college officials to whom the abuse was reported failed to follow through with investigation and report to law enforcement even after all the publicity, he said, is “stunning – that they didn’t see it (the scandals in the Catholic Church) as a wake-up call.”

The bishop said a complete, organic safe environment program must be in place, including background checks, clear guidelines for reporting abuse, and the education of children and adults about what is and isn’t appropriate behavior with children and young people.

“This work is never over. We have to create a culture where kids come first,” he said.

Al Notzon of San Antonio, chair of the bishops’ National Review Board, also addressed the importance of reporting abuse. “You report it when you see it, and you report it to law enforcement,” he told CNS. It also should be reported within the organization involved, but must be reported to legal authorities.

Charol Shakeshaft, professor and chair of the Department of Educational Leadership at Virginia Commonwealth University, was an early researcher in the area of sexual abuse of children in public schools.

She said the first thing the Penn State staff should have learned from the Catholic Church’s experience was to “report immediately.”

Too often, she said, reports are made within institutions but go nowhere. Despite any concerns for the reputation of the institution or individuals, she said, “when you do start to disclose, disclose fully and honestly.”

Preventing abuse in the first place is the most important thing, Shakeshaft said, and being aware that a seemingly kind, good person may be an abuser.

In fact, several experts note that abusers are often seen as the most popular, generous, congenial people in a group – characteristics that give them access to children.

According to Shakeshaft, many organizations have a protocol that keeps the mandated reporting of suspected child abuse within the organization, as happened at Penn State.

She said progress has been made in preventing child abuse, including good training programs, some of them developed within the Catholic Church; taking the problem seriously; and wider reporting of offenses. But the Penn State case, she said, shows us how much further we still have to go.

As Notzon put it, “healthy adults do not socialize one-on-one with children,” and there should be no relationships that involve keeping secrets from the child’s parents or from supervisory personnel.

Other examples of boundary violations mentioned by experts included such things as a teacher having breakfast alone with a child before school, giving a child his or her personal cell phone number, driving alone in a car with a child to a school sports event, or giving a child a valuable gift.

Training must be ongoing, Notzon said, because there are always new children, coaches, teachers, priests and volunteers coming into the system, and organizations have to keep monitoring and evaluating their policies.

“Every institution in society” has to look at everything they are doing with a focus on children, he said. “We’ve got to protect them.”