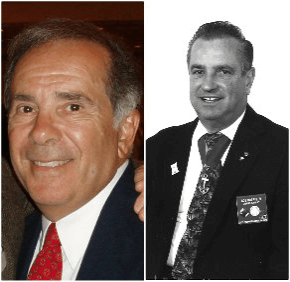 By Paul McMullen
pmcmullen@CatholicReview.org
Bob Doerfler was an outdoors friend. Walking laps around an urban reservoir, he talked up his large family, his church and the Knights of Columbus.
Paul Baker was an indoors friend. In arenas from College Park to Philadelphia to Lexington, Ky., he talked up his three sons, the underdog and basketball.
Neither product of Mount St. Joseph High School was physically imposing, but both were giants spiritually, men who led and created something out of nothing.
After the death of my father, in 1987, both graced my life. No offense to my four brothers, but Doerfler and Baker, 84 and 78 when they died within 55 hours of each other in the second week of October, offered the patriarchal touch that a young father needed.
Baker wrote two books and brought his rhetorical flourish to radio and TV. Friends and family of Doerfler nod at his “pearls,” bromides alternately witty and wise.
For all of the words the two put out, it’s what they didn’t say that resonates.
Baker assumed his first speaking platform while still in high school, when he began coaching at St. Joseph Passionist Monastery, which he took to a Catholic Youth Organization title.
He had a landmark team at Towson Catholic High 50 years ago, moved on to the University of Baltimore and then Wheeling Jesuit College in West Virginia, where his pupils included John Beilein, who coached the University of Michigan to last year’s NCAA title game.
Two of his three sons went to Loyola Blakefield. One teaches there. Another runs the local basketball camps he founded. Retired from coaching, Baker organized banquets, bus trips and high school tournaments, all promoting basketball and fellowship.
Reporting on college basketball, I knew to visit with Paul before a game. He alternately educated and grilled me during warm-ups, but as tip-off approached, his credo became “No talking during the opera.”
How can you appreciate the movement of 10 players, two coaches and three officials if you are constantly yapping about it? Observe. Absorb. Not a bad approach to liturgy, either.
While we hear reference to some children in Catholic schools being “unchurched,” it was as if Doerfler never took a breath that wasn’t “churched.”
All seven of his daughters went to Mercy High, where he was a founder of the Fathers Club and coached championship soccer and softball teams. He helped start the women’s soccer program at Loyola University Maryland, and also coached at Archbishop Curley High, where he sent his two sons. His oldest is the financial officer for the Diocese of Colorado Springs.
Bob was the head usher and a corporator at St. Francis of Assisi in Mayfield, where I was a parishioner when we met. Jogging around Lake Montebello, I would slow to walk with Bob, who recruited me to the Knights of Columbus, counseled me about fatherhood and weighed in on everything under the sun.
Never was heard a discouraging word, even though Bob endured the worst horror a father can face. In 1988, one of his darling daughters, Christine, was murdered. If ever a man had the right to show anger and despair, it was Bob, but he never talked of his immense loss, just his immense faith.
Both men were in the insurance business, Doerfler as a career, Baker for a few years in the late 1980s.
They sold policies, but primarily they sold their passion for life.
To read more featured Amen columns, click here.
PrevNext