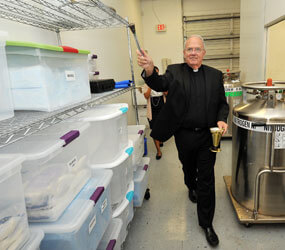 CLEARWATER, Fla. – Women giving birth by cesarean section at a Catholic hospital in Florida can contribute to cutting-edge research that could benefit burn victims, diabetics and wounded soldiers.

With the permission of the new mothers, St. Joseph’s Women’s Hospital in Tampa has been collecting placentas for use in stem-cell research by the regenerative medicine company Stemnion.

The Pittsburgh-based Stemnion recently opened a research facility in Clearwater, so that cells can be extracted from the afterbirth tissue within a few hours of delivery. Since January, 77 women with prescheduled cesarean deliveries at St. Joseph’s Women’s Hospital have consented to the placental donations, and 63 placentas have been successfully donated.

Stemnion officials gathered Sept. 23 at the Clearwater facility with church leaders, including Bishop Robert N. Lynch of St. Petersburg, Fla., and Sister Carol Keehan, president and CEO of the Catholic Health Association, to celebrate the collaboration, which started when Archbishop Donald W. Wuerl of Washington, then bishop of Pittsburgh, first heard about the fledgling company six years ago.

Sister Carol, a Daughter of Charity, said she and the bishops “wanted to see morally upright, good stem-cell research being done in our many Catholic hospitals.”

St. Joseph’s Women’s Hospital was a good candidate for the program because about 7,000 babies are born there each year, nearly 3,000 of them by C-section, although many of those are not preplanned.

The research – morally acceptable under Catholic teaching since it does not involve the destruction of human embryos – is aimed at developing healing therapies including a skin replacement barrier that could reduce disfigurement and contraction in severely burned patients.

“It’s a great opportunity to be on the cutting edge and advance the care of severely injured people, both military and diabetics and people who are terribly burned,” Sister Carol said.

William Golden, a co-founder, executive chairman, executive vice president and chief financial officer of Stemnion, said the company hopes its product “will help patients with burns to heal faster with less scarring and less pain and get them out of the burn unit faster with fewer long-term consequences.”

Golden said Stemnion does not do research involving embryonic stem cells; the Catholic Church opposes such research because it requires human embryos to be destroyed.

Franciscan Sister Patricia Shirley, vice president of mission for St. Joseph’s Hospital, which is affiliated with St. Joseph’s Women’s under the umbrella of BayCare Health System, said the placenta donation program offers an opportunity for the hospital to “live out our mission in a different way.”

“It’s helping medical science and it’s helping create opportunities for healing, which is very much a part of what we’re part of,” she said.

To promote physician support for the program, Stemnion had a wound care expert, Dr. David Steed, come to speak to the doctors and explain what the research was hoping to achieve.

“The purpose of the research is healing, and (the physicians are) invested in that already,” Sister Patricia said. “(Stemnion is) hoping to be able to use this for burn victims and for the healing of wounds for our military, and that is something again that strikes a chord in all of us and is something that we would very much like to be a part of and help support.”

Kimberly Guy, administrator and chief operating officer at St. Joseph’s Women’s, said Stemnion reimburses the hospital for its minimal costs to participate, including courier services and the time of workers charged with obtaining the consent of patients.

The placentas are transported by courier in a sterile container to the Clearwater lab, about 20 miles from the hospital. Stemnion technicians then test, isolate and store the usable stem cells and eventually transports them to the company’s main laboratory in Pittsburgh for use in research.

Each placenta collected has the capacity to yield several hundred million cells and can produce many doses of the investigational medicine that the company has in the trial phase, according to Stemnion.

The company conducted an initial clinical trial at Johns Hopkins University in Baltimore and other burn centers, and it is now undergoing a safety trial.

Sister Patricia said the hospital is pleased to be involved in a project that promotes the use of adult stem cells, which have been found effective in more than 70 treatments, including therapies for diabetes, Parkinson’s disease and heart and spinal cord conditions, according to Do No Harm: The Coalition of Americans for Research Ethics.

“This is really about a very volatile issue, and the more opportunities that we have to show how adult stem cells are being used and furthering the cause of science and of healing, the less need there will be to use embryonic stem cells, which we would not be involved in,” she said.