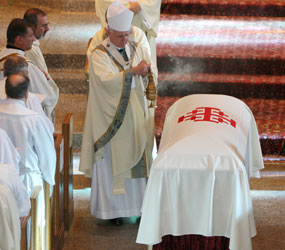 Archbishop Edwin F. O'Brien blesses the casket with incense during a funeral Mass for Monsignor F. Dennis Tinder at Immaculate Conception in Towson Dec. 12. (Kathleen Lange for The Catholic Review)|

As pallbearers slowly guided Monsignor F. Dennis Tinder’s casket out of Immaculate Conception Church in Towson following his Dec. 12 funeral Mass, approximately 120 priests and deacons united their voices in a final tribute to their brother clergyman.

A solemn church bell tolled every few seconds while the white-robed men chanted “Salve Regina” in Latin for a pastor they heralded as a priestly role model.

an illness that attacked the priest’s breathing, limited his mobility and sapped him of energy.

Monsignor Tinder confided that it was ironic for a person who had a need to be in control of his life to lose control over his body.

“I’ve asked the Lord to help me surrender this need,” Monsignor Tinder told his friend. “Now I am going to learn how to do it.”

Monsignor Woy, vicar general, recalled that Monsignor Tinder tried to maintain a positive outlook on life even in his illness. Monsignor Tinder looked to the example of Monsignor Robert Passarelli, who said before his own death that he believed God embraces his people into everlasting life.

“He looked at me in one of the most focused ways ever,” Monsignor Woy said of Monsignor Tinder. “And he said, ‘I believe that and I have spent my whole life trying to preach that message.’”

“Monsignor Tinder was well loved for his generosity and joy,” Archbishop O’Brien said. “He was a truly happy priest. I’m sure his smile will be met by the smile of the Good Shepherd.”

Among the hundreds of mourners who crowded Immaculate Conception were former parishioners of the parishes Monsignor Tinder served. Ordained to the priesthood on May 18, 1968, Monsignor Tinder was the associate pastor of St. Pius X in Rodgers Forge from 1968-73. He was coordinator of the archdiocesan diaconate program from 1973-75; director of vocations from 1975-82 and pastor of St. Joseph in Fullerton from 1982-1991.

Before being appointed pastor of Immaculate Conception in 2000, Monsignor Tinder served as pastor of St. Jane Frances de Chantal in Pasadena from 1982-91.

Donna Bankard, a parishioner of Immaculate Conception who worked with Monsignor Tinder in the parish office, said the priest was a “wonderful servant of our Lord who touched the lives of many.”

“He wasn’t just a priest,” she said. “He was someone you could talk to like a father. He was a father for everyone.”

“We had a meeting one Friday evening (to discuss CYO),” Connolly remembered. “Two years later, we had 600 members. He had a great ability to communicate well, not only with young people but with adults.”

Dr. Thomas H. Powell, president of Mount St. Mary’s University in Emmitsburg, described Monsignor Tinder as a “true son of the Mount.” Monsignor Tinder attended the seminary there and later became one of the longest-serving university board members.

Mount St. Mary’s will honor Monsignor Tinder with an honorary doctorate at commencement and is planning to dedicate a special wall to his memory.

“He always put himself last,” Powell said. “Even when he was ill, he was calling me up asking how I was doing. He was the perfect priest all the way around.”