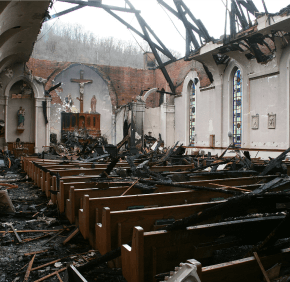 BENWOOD, W.Va. – Where parishioners once sat for Mass in Benwood now sit the charred remains of a building regarded as a monument in the community.

At a time when parishes look forward to the most holy of seasons and the Easter triduum, a fire tore through St. John Church March 30.

No one was injured in the blaze, and fire marshals were on the scene early the next morning to begin investigating the cause. As of April 9, no cause had been determined.

The administrator of the parish, Father Bekeh Utietiang, who was in the rectory attached to the church, said he had no idea that a fire had broken out.

“I was in the kitchen,” he said, “when I heard the doorbell ring. I said to myself, ‘Who’s ringing the doorbell this late?’ It was a neighbor to tell me the building was on fire. When I came out, I could just see the huge flames.”

Father Utietiang, who was able to get out safely, said a gathering had taken place at the church just a few short hours before the fire.

A landmark in the city of Benwood, St. John has stood for more than 124 years, a testament to the Catholic community in the small town just south of Wheeling. “This building is very much the heart of the city,” he said.

Tifany Giavengo, who lives just two blocks from the church, was at home when the fire started. She is a parishioner and administrative assistant at Ss. James and John School – which is attached to the church and sustained some and water damage.

Giavengo said she has made many memories in the church. “I was baptized here, I was married here,” she said. “My children were baptized here. It’s very emotional, but Benwood is an extremely strong community. Our parishioners are very strong and we will pull through it.”

Bishop Michael J. Bransfield of Wheeling-Charleston traveled to the scene to be with parishioners and those gathered to join them in prayer and support.

“During this holiest of weeks on the Christian calendar, we are terribly saddened by the news of a devastating fire at St. John Church,” he said in a statement issued when news of the fire broke.

“I join the Benwood community at this hour in prayer, and we thank the brave firefighters and first responders who are working so hard to battle (it),” he said, adding he was relieved to hear that Father Utietiang, though “very shaken,” had made it out of the structure unharmed.

Classes were canceled at the school March 31 and April 1; the school was scheduled to be on spring break until April 13.

John Reardon, director of the diocesan Office of Buildings and Properties, said two engineering firms performed a structural inspection on the church and adjacent buildings April 1. The results would not be known for at least a week.

Access to the church was restricted to personnel from the Office of the State Fire Marshal and the diocese’s insurance company and any other professionals needed to continue to monitor the structure’s integrity and stability, he said.

Reardon added that efforts were underway “to attempt to retrieve record documents. … Once all investigations and the engineering analysis is complete, we will still need time to assess all options available on how to deal with this unfortunate event.”

The Diocese of Wheeling-Charleston has set up two funds – the St. John Parish Fire Relief Fund and the Ss. James and John School Fire Relief Fund to meet the greatest needs of the church and school, including costs of re-establishing operations and purchasing educational resources for the school and liturgical materials for the parish. Funds also will be used to pay for any items that might not be covered by insurance.

Bishop is assistant editor at The Catholic Spirit, newspaper of the Diocese of Wheeling-Charleston.