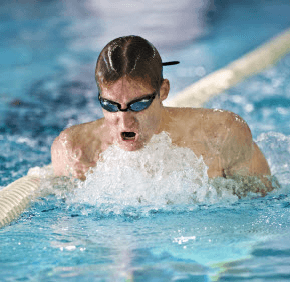 One year to the day after Bradley Snyder was blinded by an improvised explosive device in Afghanistan, the 28-year-old will be competing at the Paralympics.

“It’s a huge moral victory to be able to compete at this level this soon after my injury,” said Snyder, a Canton resident.

Snyder is one of five swimmers and two coaches with a Baltimore connection on the U.S. swim team competing in the 2012 Summer Paralympics, Aug. 29- Sept. 9 in London.

Loeffler also coaches Joe Wise, a sophomore at the Baltimore college who competes on the Greyhounds’ intercollegiate swim team.

During their peak training period, Wise and Snyder trained for a couple hours each day, six days each week.

“I don’t see people with disabilities as any different than other people,” he said. “I just feel like we’re all created equal and everyone deserves a fair shot.”

This is first Paralympics for Snyder and the second for Wise. Both want to continue to compete through the 2016 Summer Paralympics in Rio de Janerio, Brazil.

Wise finished fifth in the 400 freestyle in the 2008 Summer Paralympics in Beijing.

Snyder, a 2006 graduate of the United States Naval Academy, swam growing up and in Annapolis.

After the Sept. 7, 2011 explosion, Snyder returned to the pool to prove to his friends, family and himself that “I’m still the same person as I was before,” he said. “I wanted to demonstrate the capabilities I do have.”

In the pool, “the name of the game now is to go as fast as I can without crashing,” said Snyder, who uses a “tapper,” someone who stands on the pool deck and uses a tennis ball attached to a pole to warn swimmers as they near a wall.

Wise, 19, of Menlo Park, Ca., trained at home after leaving Loyola last spring because a degenerative muscle disease that causes muscle fatigue and weakness in his legs, hips and diaphragm. Diagnosed at age 9, Wise uses a ventilator for up to two hours during the day and at night.

A lifelong swimmer, Wise has lived longer than doctors predicted.

“They think if I didn’t exercise I wouldn’t be here right now,” Wise said. “It’s a little scary. I’ve been able to use that fear for motivation.”

A Catholic, Wise said “God has played a big role in keeping me going.”

Becca Meyers, a senior at Notre Dame Preparatory School in Towson, is also on the U.S. Paralympic swim team. The 17-year-old was born with Usher Syndrome, which causes hearing loss and progressive vision loss.

At age 15, Meyers, earned a bronze medal in the 4×200-meter relay and swam in six individual events at the 2009 Deaflympics in Taiwan.

In 2011, she competed in the World Deaf Championship in Portugal and earned four gold medals.

The Paralympic athletes will be lodged in the Olympic Village and compete in the same aquatic center used in the Summer Olympics.

“It really is an identical experience in every way,” Loeffler said.