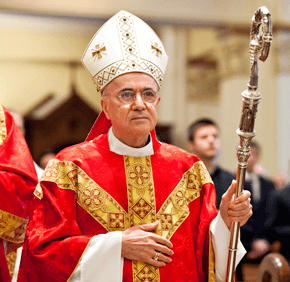 During his homily, Archbishop Vigano spoke about the Year of Faith, which began Oct. 11 and concludes Nov. 24, 2013, per Pope Benedict XVI’s proclamation, and the “New Evangelization,” a movement promoted by Blessed Pope John Paul II and Pope Benedict to encourage people to grow in their faith – especially those who have drifted away from the practice of their faith.

“How blessed are we to join together in worshiping in this special time, the life of the church, to celebrate the beginning of this Year of Faith,” Archbishop Vigano said.

His first visit to the Mount came the day before his one-year anniversary as apostolic nuncio, ambassador of the Holy See, to the U.S. He resides in Washington, D.C.

“A prophet is to be the speaker, the mouth of God and as ordained priests we must give testimony to the power of the crucified Christ,” Archbishop Vigano said. “We know that we live in an age of uncertainty, in a time of not knowing what tomorrow will bring, but we are confident that faith will give us the strength we need.”

During a question and answer session following Mass, Archbishop Vigano was peppered with questions from some of the 173 seminarians that addressed his role as papal nuncio, his vocation and how to spread the Gospel to friends who may be drifting from the faith.

Archbishop Vigano, who has been serving the Holy See for 39 years, said the duties of a papal nuncio “in a country so big like this (the U.S.), it is like an impossible mission.”

Asked about how to reach those drifting from their faith, Archbishop Vigano said “it is a great challenge. That is why the Holy Father has signaled for the Year of Faith.”

He added that “the responsibility of preaching the Gospel … we should be firm, no shaking about that.”

“He personally came to reassure us of the Holy Father’s affection and support of our formation to prepare for the New Evangelization,” Deacon Haan said.

To see a slideshow of the event, navigate the arrows below.

“It’s one person away from the pope,” Boric said.

Monsignor Steven P. Rohlfs, the seminary’s rector, who invited Archbishop Vigano to campus, said the visit “was substantially meaningful to us because he is the personal representative of the Holy Father.”

Having the seminarians meet the papal nuncio brought to life who he is.