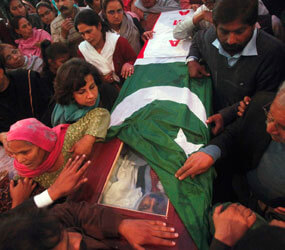 BANGALORE, India – More than 20,000 Christians from all over Pakistan flocked to the remote village of Kushpur in the Faisalabad Diocese for the funeral of Shahbaz Bhatti, Pakistan’s assassinated minister for minorities.

“It was a very emotional funeral with the people wailing and weeping all through,” Peter Jacob, executive secretary of the Pakistani bishops’ justice and peace commission, told Catholic News Service in a telephone interview from Kushpur March 4.

Bhatti, 42, a Catholic, was assassinated by unidentified gunmen who pumped bullets into his car from automatic weapons as he was being driven to his office in Islamabad March 2.

The final leg of the funeral was led by Bishop Joseph Coutts of Faisalabad, joined by two Protestant bishops and dozens of Catholic priests.

Bhatti’s body was flown to Kushpur in the afternoon from Islamabad, about 300 miles away, after a memorial Mass at Our Lady of Fatima Church in Islamabad. Bishop Rufin Anthony of Islamabad-Rawalpindi was principal celebrant.

“All the minorities (in Pakistan) have lost a great leader,” he added.

Bhatti founded the Christian Liberation Front in his student days and launched the All Pakistan Minority Alliance in 2001. He joined the Pakistan Peoples Party in 2002. When the party, under President Asif Ali Zardari, assumed power in early 2008, Bhatti was named to the National Assembly under the quota reserved for Christians and was soon the federal minister for minority affairs.

An outspoken critic of Pakistan’s blasphemy law, Bhatti became a target of Islamic extremists in November after he initiated a clemency petition for Asia Bibi, a Christian mother of five sentenced to death for blasphemy.