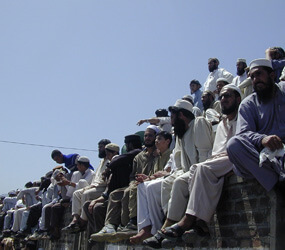 LAHORE, Pakistan – Archbishop Lawrence Saldanha of Lahore has written to the country’s president and prime minister expressing concern over a regulation that allowed Islamic law to be implemented in northwestern Pakistan.

“We note with sorrow that your government has failed to take stock of the concerns of civil society in Pakistan in your decision,” said the April 16 letter by Archbishop Saldanha, president of the Pakistan Catholic Bishops’ Conference. The Asian church news agency UCA News reported on the letter April 21.

President Asif Ali Zardari signed the new regulation April 13, after it was approved by Parliament. In February, the government of the North-West Frontier province reached a peace deal with local Taliban militants, who had been fighting for 18 months to impose Islamic law. The new regulation brings six districts, including the Swat Valley, under the Pakistani Taliban’s strict interpretation of Shariah, or Islamic law.

Archbishop Saldanha’s letter said that “besides jeopardizing the socio-economic and cultural growth in Swat and Malakand (division),” the decision also has given legal sanction to the “dictates of the trigger-happy Taliban.” The letter added that the resolution “erodes constitutional protections for minorities and women.”

Now minority communities in the province “are forced to endure unemployment, intimidation and migration,” the archbishop said in the letter, adding that St. Mary’s school, convent and chapel in Sangota, as well as the Don Bosco School in Bannu, have been bombed. He also pointed out that Christian, Hindu and Sikh families have been forced to flee because the Taliban imposed “jizya,” a tax levied on non-Muslims living under Shariah.

Archbishop Saldanha insisted that “religion has to be regarded as a personal matter and should have nothing to do with the affairs of state.”

The archbishop and Peter Jacob, executive secretary of the bishops’ justice and peace commission, signed the letter.

Other Christian leaders also have criticized the government for approving Islamic law in Taliban-controlled areas.

Mr. Javed, also president of the province’s chapter of the All Pakistan Minority Alliance, said that “only the constitution” can safeguard minorities.

A catechist from Peshawar, the provincial capital, speaking on the condition of anonymity, told UCA News that the only Catholic church in the city canceled its Easter and Christmas celebrations because of threats from the Taliban.