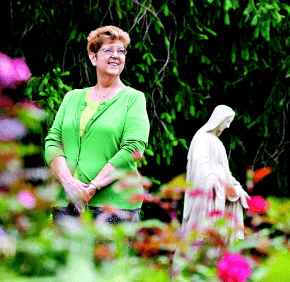 Preparing for the first day of school when 23 third-graders would enter her classroom, Carol White remembers neatly arranging pencils and crayons on their desks, then looking around the room thinking, “Oh, my God, what am I doing?”

It was September 1969 and White, who was just 20 years old, was ready to begin her first year teaching third-grade math and science at the School of the Cathedral of Mary Our Queen.

After teaching for 43 years at the Homeland school, White is retiring. Her last day was June 6.

“I’m glad to leave while it’s still fun,” White said. “It is just the right time. It’s getting a little harder to keep up with 11-year-olds.”

After graduating from what was then Towson State College, White taught for a few months in 1969 at a Baltimore city public school before starting at the Cathedral school.

“I always wanted to (work in) Catholic schools,” White said. “I don’t know why.”

White graduated from the former Seton High School. Before that, she attended the former parish school at St. Matthew, Northwood, where she was inspired by her fourth-grade teacher to go into teaching.

The Parkville resident began her teaching career when Richard M. Nixon was a first-year president, gas cost 35 cents a gallon and her starting salary was $5,000.

There were no computers or foreign language classes at the school.

“The changes have all been good,” said White, a parishioner of St. Isaac Jogues, Carney. “The school, on the outside, it seems the same. The inside is different.”

Teaching methods and technology have evolved, from filmstrips and VCR cassettes to DVDs and the Internet.

“It was a big treat to have a filmstrip,” White said.

Computers were first introduced at the school in the 1980s and “I think everyone was scared,” White said.

Now, “if anyone takes this (technology) stuff away from me, I’d holler,” White said.

In 1985, White began using Time magazine as a springboard for a current events discussion. She saved each magazine cover and at the end of the year, students voted on the two covers they thought were the most important that year.

Decades later, White said former students visit and ask to see the covers, which she has kept for 27 years.

White has taught thousands of students, including “many” legacies, children of her former students. She taught a former teacher at the school, and one hired for the upcoming school year. “A number of student teachers,” she said, have also been former students.

“They come back to haunt me,” White said with a jovial laugh.

Two of her former students married; students from her first class are turning 50.

In addition to teaching, grading papers and planning classroom lessons, White has been “part-time nurse, caregiver and psychologist.”

“It’s like a Broadway show and you’re the one person on stage,” White said. “It’s hard work but it’s very satisfying.”

In retirement, White plans to volunteer as a docent at the Hampton mansion in Towson and read to children through a program at Ladew Topiary Gardens in Monkton, combining her love of history and children.

She also plans to spend time crocheting, continuing to make prayer shawls for Stella Maris residents and hats for newborns.

White, who never married and doesn’t have any children, said she got her fill of children at school.

Kay Pulcinella, the Cathedral school’s nurse for 24 years and the mother of four adult children who all attended the school and had White as a teacher, spoke about White at an April 20 farewell celebration that included the rededication of a garden that was initially dedicated to her after 25 years of teaching.

Pulcinella shared what her children and their friends said about White. The comments included “what a safe and secure place” her classroom was; “I feel smart after every class”; and “no put-downs allowed.”

“What a testament,” Pulcinella said, “to a teacher.”