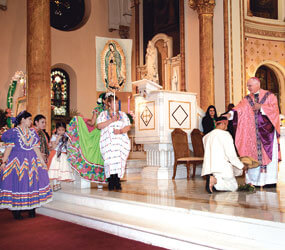 Father Robert Wojtek is getting used to overflowing crowds at Sacred Heart of Jesus in Highlandtown during Spanish Masses.

One of the biggest gatherings there came Dec. 11, when the parish celebrated the feast of Our Lady of Guadalupe, which marks Mary’s appearance to a Mexican peasant in 1531.

Sacred Heart, which is now the center of the Archdiocese of Baltimore’s Hispanic outreach in Baltimore City, was filled for the feast Mass, celebrated by Archbishop Edwin F. O’Brien, apostolic administrator of the archdiocese.

Father Wojtek, a Redemptorist, has been pastor in Highlandtown since August.

“They feel at home,” he said of the crowds flocking to the parish. “They see something of their own and something they’re familiar with. That means a lot to them.”

The Dec. 11 Mass featured an artistic likeness of Our Lady of Guadalupe, which appeared on St. Juan Diego’s cloak in what is now Mexico City. The image has become a symbol of hope for Latin Americans and for those who seek to protect the dignity and sanctity of human life.

Feast celebrations often include dancing, music and roses left in front of the image of Our Lady of Guadalupe.

Eighteen archdiocesan parishes have Spanish Masses. St. Gabriel in Woodlawn had hundreds participate in its Our Lady of Guadalupe celebrations, according to pastor Monsignor Thomas L. Phillips.

Sacred Heart of Jesus became the city’s Hispanic hub in August, when Spanish-speaking parishioners from St. Michael in Fells Point and Our Lady of Pompei in Highlandtown were encouraged to transfer there. It is now known as Sacred Heart of Jesus-Sagrado Corazón de Jesús.

This was the first Our Lady of Guadalupe celebration at Sacred Heart of Jesus since the changes.

“It’s a great honor,” Melissa Pelaez said. “With all the transition that’s been happening, to have the presence of our bishop here is just wonderful.”

Although Our Lady of Guadalupe is important to the Mexican culture, many Latinos and Hispanics have embraced the day as well. Guatemalans, like Pelaez, are no different.

“Our Lady of Guadalupe is the Lady of the Americas, so it’s everywhere,” she said. “I’m more familiar with it more here in the United States than in my country.”

According to the U.S. Conference of Catholic Bishops, Latinos will eventually become a majority in the U.S. Catholic Church, as more than 50 percent of American Catholics under the age of 25 are Latino.

The Our Lady of Guadalupe celebrations brought many of those young people to Sacred Heart of Jesus.

“I think we are blessed to have it here because this is a new church for us,” said Valles. “We moved here and we’re so happy to share with our community and with our young adults group. It’s so important that we come.”