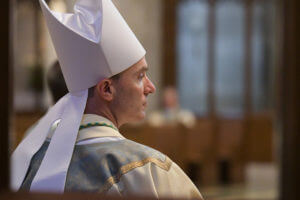 Born in 1972 to George and Maureen Parker of Cleveland, Ohio, Adam J. Parker attended the University of Maryland, College Park before entering pre-theology at St. Mary’s Seminary and University in Baltimore in preparation for the priesthood. He continued his formation for the priesthood at the Pontifical North American College in Rome and was ordained a priest on May 27, 2000 by the late Cardinal William H. Keeler.  From 2001 to 2005, he served as Associate Pastor in three parishes in Allegany County and in 2005 was named Pastor of the Church of the Ascension in Halethorpe. In 2007, he was appointed Priest-Secretary to Archbishop Edwin F. O’Brien, 15th Archbishop of Baltimore, and was named a monsignor by Pope Benedict XVI in 2011.  In 2012, Monsignor Parker was assigned to Rome, where he continued to assist the newly elevated Cardinal O’Brien, who had been appointed Grand Master of the Equestrian Order of the Holy Sepulcher of Jerusalem. Upon his return to the Archdiocese of Baltimore in 2013, he served as Vice Chancellor for one year prior to being appointed Vicar General and Moderator of the Curia by Archbishop William E. Lori. In December 2016, Pope Francis appointed Monsignor Parker Auxiliary Bishop of Baltimore and he was ordained in January 2017. Bishop Parker chose for his episcopal motto, “Go Make Disciples,” from the end of the Gospel of Matthew (Mt 28:19).