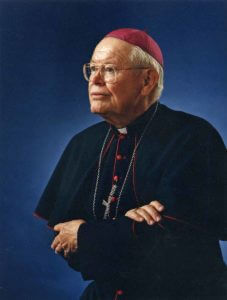 Motto: Auscultabo ut Serviam. “I listen that I may serve.”

Born in Washington, Indiana, October 9, 1913, the son of Thomas Martin and Zelpha Ann (Queen) Borders, he attended Catholic elementary and high school before enrolling in St. Meinrad’s College and Seminary. Although he intended to be ordained for the Archdiocese of Indianapolis, he responded to an appeal from Abp. Joseph F. Rummel of New Orleans for priests and seminarians in 1936. He transferred to the Archdiocese of New Orleans and completed his studies at Notre Dame Seminary, New Orleans. He was ordained a priest on May 18, 1940. His first assignment was to Sacred Heart Parish in Baton Rouge, where he became acquainted with a number of young adults who would soon be leaving to serve in the armed forces during the Second World War. These relationships influenced his decision to enlist in the U.S. Army Chaplain Corps in 1943, where he served as a battalion chaplain with the 362nd Infantry Regiment of the 91st Infantry Division in North Africa and Italy. He held the rank of major and was awarded the Bronze Star for Valor for carrying a wounded soldier to safety while under fire.

He returned to Louisiana after the war and in 1946 was sent to the University of Notre Dame to pursue a graduate degree. He received a M.S. in Education the next year and has held an unflagging commitment to Catholic education throughout his life. Upon completing his studies, he resumed parish ministry. In 1961 when the Diocese of Baton Rouge was created out of the Archdiocese of New Orleans, he became a priest of the new diocese. Two years later was named a domestic prelate with the title of Monsignor and in 1964 was appointed rector of St. Joseph Cathedral. During this period, he served as a diocesan consultor, director of seminarians, and as moderator for the diocesan councils of Catholic Men and Women. He is also recognized as one of the founders of St. Joseph Catholic Preparatory School, a minor seminary.

He was appointed by Pope Paul VI bishop of the newly erected Diocese of Orlando on May 2, 1968, and was consecrated on June 14, 1968. He devoted tremendous energy to implementing the directives of the Second Vatican Council in Orlando, with particular emphasis on collegiality and shared responsibility. Under his guidance, diocesan and parish councils, boards of education, and similar commissions were established. He also created a Social Services Board to correlate the work of already existing agencies. He developed a comprehensive educational program aimed at coordinating efforts in Catholics schools, campus ministry, and religious education. Social outreach centers were set up throughout the diocese to meet the needs of migrant workers and the poor.

He was appointed Archbishop of the Metropolitan See of Baltimore on April 2, 1974, succeeding Card. Lawrence J. Shehan (1898-1984), and was installed at the Cathedral of Mary Our Queen on June 26, 1974. He received the Sacred Pallium on March 24, 1975. He led the Archdiocese for the next 15 years, where he oversaw the division of the Archdiocese into vicariates, reorganized Archdiocesan Central Services, and clarified and strengthened the role of the Archdiocesan Pastoral Council and the Priests’ Council. On the national level he chaired the Bishops’ Committee on Education and served on the Bishops’ Committee on Human Values, the Administrative Board of the U.S. Catholic Conference, and the Administrative Committee of the National Conference of Catholic Bishops. He also chaired the Ad Hoc Committee for the Bicentennial of the U.S. Hierarchy. He retired on April 10, 1989 and celebrated his 96th birthday on October 9, 2009. Archbishop Borders died on April 19, 2010.