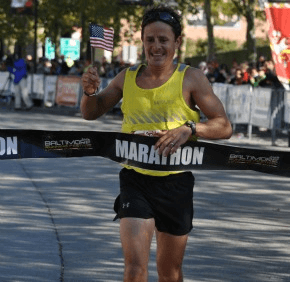 By Paul McMullen
pmcmullen@CatholicReview.org
Twitter: @ReviewMcMullen
The streets of Baltimore City have considerable meaning for Dave Berdan.
It is where he posted his fastest marathon in 2011, and where he ruled the Baltimore Running Festival’s main attraction in 2013. It wasn’t until Oct. 17, however, when he won the Baltimore Marathon a second time, that Berdan gained a full appreciation of the event’s significance to his adopted hometown.
“I noticed all of the people out there,” Berdan said, “and appreciated them a little more, especially in the neighborhoods that had been affected by the riots.”
Five months after the death of Freddie Gray Jr. and violence devastated the city and its image, Berdan shed the customary blinders of a professional athlete, as his time over 26 miles, 385 yards was padded by diversions more familiar to a first-timer.
“It felt good to slap hands with the little kids lining the course,” he said. “I knew how much that meant to the city.”
The second mile of the Baltimore Marathon passes Booker T. Washington Middle School on McCulloh Street, where Berdan taught science for two years as a young college graduate.
These days, he spends more time on the campuses of Stevenson University, where he is the head cross country coach, and at The Sacred Heart School of Glyndon, where his sons, Evan and Colin, are in the first grade and Pre-K program, respectively.
The morning announcements Oct. 21 at Sacred Heart School began with a question-and-answer session with principal Zac Coyle and Berdan. Coyle then presented him a Sacred Heart of Jesus scapular with the inscription, “Learn from Me. I am the way, the truth and the life.”
While Berdan was raised Methodist, he and his wife, Amanda, are raising their sons in her Catholic faith. Their local ties include her mother, a graduate of Baltimore’s Mercy High School.
Amanda and Dave Berdan met a decade ago, when he was visiting a friend in Baltimore and tagged along to a runners’ get-together at Cross Street Market.
She was raised at St. Joseph Parish in York, Pa., ran for York Catholic High, and graduated from Bloomsburg (Pa.) State. Her husband, a 34-year-old native of Dingmans Ferry, Pa., excelled at Elizabethtown (Pa.) College, where he was the NCAA Division III runner-up in the 10,000 meters.

Berdan coached at his college alma mater, and then at The Johns Hopkins University and Garrison Forest School (where his wife is assistant to the head of the lower school), helping both to high-water marks in distance running.
For nearly a decade, he has been tantalizingly close to the U.S. Olympic Trials in the marathon, coming within a minute of the qualifying standard in both 2008 and 2012. That standard has since been lowered to 2 hours, 18 minutes; his fastest, 2:21:19, came in Baltimore four years ago. That was when big prize money that attracted professionals from Kenya relegated him to 10th place, and before the nagging hip injury that caused him to drop out of the 2014 Baltimore Marathon.
“I was able to enjoy the event more this year, run within myself,” Berdan said.
Matt Jablonski, a 2011 graduate of Loyola Blakefield, returned home to win the CareFirst BlueCross BlueShield Half-Marathon at the Baltimore Running Festival.
Before he went off to the University of Oregon, Jablonski was the fastest miler in Maryland Interscholastic Athletic Association history, and a two-time MIAA cross country champion.
Thanks in part to Berdan, Stevenson University will host the MIAA championships Nov. 4. Before that, it will host the Interscholastic Athletic Association of Maryland championships Oct. 27.