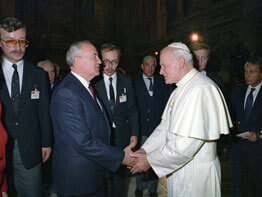 The U.S. Embassy to the Holy See observed the event with a symposium and a dinner, where about 50 guests raised their glasses in a toast to a milestone that today seems inevitable, but once seemed unthinkable.

The U.S. ambassador to the Vatican, Mary Ann Glendon, who was to leave her post six days later to return to a teaching job at Harvard, drew appreciative laughter at the dinner when she read from an 1865 letter that described Rome as the perfect listening post.

At that time, the secretary of the U.S. legation to the Papal States wrote to his superiors in Washington and asked for a bigger budget so he could give “small but frequent entertainments” to other diplomats and the monsignors heading Vatican departments.

“European diplomacy is carried on by dinners and parties – you gather information this way to be obtained in no other manner,” he wrote.

A glance around the embassy’s banquet tables found clerical and diplomatic guests nodding in assent.

But if the idea of having a full-time ambassador stationed at the Vatican seems like a no-brainer, that hasn’t always been the case. In 1984, President Ronald Reagan’s decision to move from an on-again, off-again “personal envoy” to full-fledged diplomatic relations was controversial, to say the least.

Baptists, Seventh-day Adventists and Protestant organizations criticized the move. Complaints came from Americans United for Separation of Church and State, and even the National Council of Churches. The late Rev. Jerry Falwell, who headed the Moral Majority movement, reacted by asking how long it would be before a similar request came from Mecca, the chief holy city of Islam.

And of course, lawsuits were filed, although they were eventually dismissed.

The traditional argument against U.S.-Vatican relations was that the Vatican – technically, the “Holy See” – was first and foremost a church, not a state, and should not be privileged by a diplomatic presence.

President Franklin Roosevelt appointed the first envoy to the Vatican just before World War II. But when President Harry Truman tried to appoint a successor in 1951, he met with a storm of protest, and the post went vacant for nearly 20 years. Reagan’s decision to elevate the position to ambassador was considered a courageous one that might cost him politically.

It wasn’t long before most of the criticism faded. One big reason was that under Pope John Paul II, who was a strong critic of East European communism, U.S. and Vatican interests were seen to coincide.

It wasn’t just a matter of moral support, but information-sharing as well. At one crucial moment in history, a few hours after a papal meeting with Soviet President Mikhail Gorbachev in 1989, the Vatican told the United States in a confidential assessment that Gorbachev could be trusted as a genuine reformer.

The late pope’s high profile as a defender of human rights and human dignity, along with his frequent trips to the United States, also made the Vatican seem more like a natural ally and less like a foreign planet.

After the terrorist attacks of Sept. 11, 2001, the Vatican’s qualified support for a U.S. military response in Afghanistan had embassy employees handing out pins with the U.S. and Vatican flags.

Today, the United States has one of the biggest and most active embassies to the Holy See and has launched cooperative projects with the Vatican in areas like human trafficking and religious freedom.

There have been rough spots, too, most of them in the international arena.

As he attended Christmas midnight Mass in 1989, U.S. Ambassador Thomas Melady was called out of St. Peter’s Basilica by his aides and told that Panamanian dictator Manuel Noriega had escaped U.S. troops and taken refuge in the Vatican’s nunciature in Panama City. Melady then passed a handwritten note during the liturgy to Cardinal Agostino Casaroli, Vatican secretary of state, opening a delicate round of negotiations that lasted 10 days and ended in Noriega’s surrender.

The administration of President Bill Clinton clashed with the Vatican over international policies on population control and abortion – a rift that U.S. Ambassador Raymond Flynn, a Catholic, was unable to mend.

The launching of the two Iraqi wars, in 1991 and in 2003, were probably the toughest trials for U.S.-Vatican diplomacy. Pope John Paul was strongly against military intervention in both cases; in 2003, he sent a personal envoy, Cardinal Pio Laghi, to try to convince President George W. Bush to avoid war.

Cardinal Laghi met with Bush but felt the president had already made up his mind to invade Iraq. The cardinal was strongly critical of the U.S. decision to go to war and made no bones about saying so in later years.

Yet Cardinal Laghi, who had been the first apostolic nuncio to the United States in the 1980s, considered himself a great friend of the United States. In some ways he was a symbol of the good times and hard times in U.S.-Vatican relations. He died at age 86 Jan. 10 – at almost the precise moment when, 25 years earlier, the United States and the Vatican announced the establishment of diplomatic relations.

Before the start of the U.S. Embassy dinner marking the silver anniversary, participants marked his passing with a moment of silent prayer.