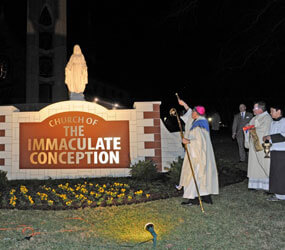 One by one, hundreds of parishioners of Church of the Immaculate Conception in Towson filed outside to surround the parish’s beloved statue of the Blessed Virgin Mary Dec. 8.

Singing the words of “Immaculate Mary,” they saw the statue’s shadow cast to more than 20 feet tall on a nearby bell tower. The message was clear: Mary was back where she belonged and ready to welcome all to the parish on Bosley Avenue.

The six-foot statue had been knocked down, some believe by crowbar, March 19. In addition, the statue’s left hand was knocked off and lights were damaged. The statue was repaired and beautified during recent months and formally dedicated by Auxiliary Bishop Denis J. Madden Dec. 8, the feast of the Immaculate Conception.

Parishioner Marci Towel, a member of the pastoral council and a parishioner of 41 years, said “we were all just so deeply saddened that it happened.”

Added pastor Joseph F. Father Barr: “I would hope that Towson would be known as a place for respect for all houses of worship – Catholic, Jewish, Protestant, Muslim or whatever – and not a place where there would be vandalism.”

Sadness turned to gladness, though, as the restored Mary returned.

The statue stands on a pedestal behind new stone signage naming the parish.

“We have a beautiful sign that announces the church and the beautiful woman behind it,” Towel said.

At the start of Mass, Father Barr noted that Monsignor Edward J. Lynch, who was pastor at the time, received the donation for the statue of the Blessed Mother 26 years ago. Monsignor Lynch concelebrated the Mass, along with Father Barr and other priests.

The statue had been erected on a hillside at Immaculate and, through the years, the area surrounding it became damaged by storms.

“When I arrived in July 2010, it was ugly down there. It was really a mess,” Father Barr said. “I was hoping we could do something, but we didn’t have it in the budget.”

While the vandalism was unfortunate, it allowed the parish to beautify the area surrounding the statue. Father Barr put out an appeal- what he called “a begging letter” – to parishioners to contribute to the statue’s restoration. In total, the project raised more than $32,000.

“I was overwhelmed,” Father Barr said of their kind response. “They basically gave me double what it was going to cost and so that helped to do a plan for a better quality of security lighting.”

The artist who worked on Mary’s hand went through different versions before finding the perfect one, Father Barr said.

Father Barr said that the restored statue’s placement, in front of the bell tower, is a message to all who drive up to Immaculate Conception.

“It’s meant to be a welcoming sign,” Father Barr said, “with both hands greeting people.”