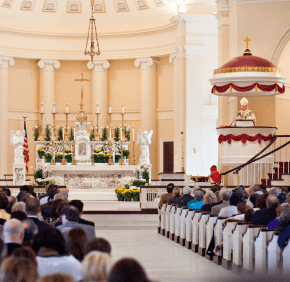 By Maria Wiering
mwiering@CatholicReview.org
Twitter: @ReviewWiering
Archbishop William E. Lori celebrated his first Easter Sunday Mass as Archbishop of Baltimore March 31 at the Basilica of the National Shrine of the Assumption of the Blessed Virgin Mary in Baltimore.
The Mass marked the grand reopening of the Basilica after it was partially closed in August to undergo repairs from damage sustained during an August 2011 earthquake.
“If its original architect, Benjamin Latrobe, were to walk in, he would rejoice to see his handiwork made new with resplendent glory,” Archbishop Lori told a standing-room-only crowd at the Basilica.
Presiding at the Mass with Archbishop Lori was Cardinal William H. Keeler, archbishop emeritus of Baltimore. Concelebrants were Monsignor Arthur E. Valenzano, the Basilica’s rector; Capuchin Franciscan Father William Graham, assisting clergy at the Basilica; and Father Joseph M. O’Meara, who is retired from ministry.
In his homily, Archbishop Lori said that Easter is not only a holiday to celebrate with family, but a day for self-examination and reflection on Jesus’ life and love for mankind.
“(Jesus) has broken the power of sin and death, and he has given us that same power to overcome sin and death in our own lives, in the sacramental life of the church, most especially baptism and holy Eucharist,” he said. “This is where we encounter the risen life and begin to share the new life he won for us.”
Archbishop Lori praised efforts to restore and repair the Basilica, the nation’s first Catholic cathedral. The building underwent comprehensive restoration in 2006 under the direction of Cardinal Keeler.
Calling the Basilica a church “built as a witness to the church’s faith in Jesus Christ, crucified and risen,” Archbishop Lori said that Catholics must “invite the Lord into that inner temple of our consciences, and there allow him to repair whatever damage has been caused by the recurring earthquakes of sin, of selfishness and discord.”
“Let us invite him not only to make external repairs, but to put the steel of supernatural virtue so as to reinforce a structure that is meant to stand not for centuries, but for all eternity,” he said.
At the end of Mass, Archbishop Lori presented Monsignor Valenzano with the new title “protonotary apostolic,” a high papal honor. He cited the priest’s efforts to oversee the basilica’s repairs while keeping the parish unified and growing in community and commitment to the Gospel.
“It’s a confirmation from my boss that this is one great priest,” Archbishop Lori said.
Monsignor Valenzano, who is undergoing treatment for acute myeloid leukemia and wore a surgical mask to avoid infection, told worshippers that the honor recognizes the collective work of the priests in the archdiocese.
“Whenever a pastor of the community is honored, the whole community is honored,” he said.
“This papal honor says something about being close to the Holy Father, and being a priest is being close to the bishop and God’s people,” he added. “I pray that this helps all of us become close to the great high priest, the risen Lord Jesus Christ.”
The honor has previously been extended to two other current priests of the archdiocese: Monsignor Arthur W. Bastress, pastor of St. Alphonsus in Baltimore; and Monsignor Robert A. Armstrong, who is retired from ministry.
The night before, Archbishop Lori celebrated Easter Vigil Mass at the Cathedral of Mary Our Queen in Homeland. More than 765 new Catholics entered or were confirmed into the Catholic Church at Easter Vigil Masses throughout the Archdiocese of Baltimore, according to a statement from the archdiocese.
Also see:
Sacred Heart in Highlandtown takes Good Friday Stations to the streets
Walking the Walk
Copyright (c) March 31, 2013 CatholicReview.org
PrevNext