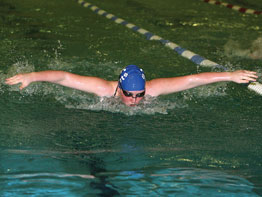 Let’s talk about the girls team first. Now 3-0 in the IAAM A Conference, the Lady Saints are 35 deep, led by senior captains Meghan O’Leary, butterflier and distance events, and Sara Smith, a true sprinter.

The Saints are a relatively young team with depth and high-level competition experience under their belts. Sophomore Olivia Cortese is a prime example, reaching the finals in the 100-freestyle race at the National Catholics in 2007.

With six sets of siblings on the two teams, the Saints train at the Anne Arundel Olympic Swim Center for just one hour a day, making practice time tight.

The boys team, competing in the MIAA B Conference, is now 2-1 but uniquely only have nine swimmers. It takes a minimum of seven swimmers to compete in a dual meet, so the Saints, two-time defending champions, will have an interesting year ahead of them.

“This is a special year for us as these seniors were the incoming class when the boys’ program began,” said O’Leary. The Saints are led by senior captains Danny Quinn and Tom Shea.

Quinn has had a phenomenal career at St. Mary’s, remaining undefeated in the 100 butterfly since his freshman year, with a top time of 53.1. Quinn is headed to the Naval Academy in 2008. Tom Shea is challenged everyday by senior teammate John Donovan in the 100 breaststroke, forcing tough competition and improved times for both swimmers.

Other top swimmers for the Saints are seniors Tommy Donahue, headed to Princeton for water polo, Scott Sabbatini and freshman newcomer from Italy Joe Thibodeau, the team’s utility swimmer.