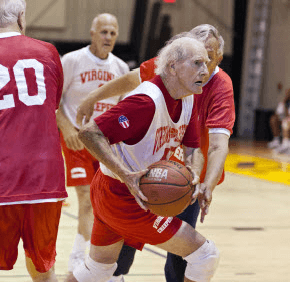 After injuring himself in a basketball tournament in Florida, David Gately was hobbling up and down the stairs of his home, eliciting snickers from his son, David Jr., one of the players he coaches at Calvert Hall College High School in Towson.

“You start moving, though,” Gately said, “and you feel better.”

According to George Roth, a fellow hoops aficionado who also happens to be an authority on aging, that is the point of it all.

From the 47-year-old Gately to Roth, 66, and men in their 80s such as Gil Hoffman and Paul McGillicuddy who inspired him to elevate his heart rate on the hardwood, basketball is the activity of choice for scores of mature parishioners throughout the Archdiocese of Baltimore.

In addition to a strenuous workout and camaraderie, competitive basketball offers travel opportunities. The Maryland Senior Olympics, held Sept. 8 at St. Frances Academy in Baltimore, served as a regional qualifier for the 2013 National Senior Games, which will be held next summer in Cleveland.

The tournament included Hoffman, a parishioner of Immaculate Conception in Towson, a regular at the Bykota Senior Center in Towson, which operates under the auspices of the Baltimore County Department of Aging, and McGillicuddy, who worships at Holy Cross in Federal Hill and the Baltimore Basilica, and played for the Virginia Creepers.

Roth, a parishioner of St. Mary, Pylesville, read about the two in the Catholic Review a few years back, nodded in approval and began joining Bykota’s pick-up games.

From 1972 to 2000, Roth worked for the National Institutes of Health, on its Baltimore Longitudinal Study of Aging. He has plenty to say about caloric intake and exercise, as the author of “The Truth About Aging: Can We Really Live Longer and Healthier?”

“If you are blessed with good genes, great, that contributes 25 to 30 percent to your health and longevity,” said Roth, who holds a Ph.D. in microbiology. “The rest is lifestyle, environment. You can improve on good genes, or bad ones, for that matter.”

Once measuring 6-foot-4 but now 6-3 – we lose height with age – Roth enjoyed the game growing up in Philadelphia, but wasn’t good enough to make his Monsignor Bonner High team, let alone Villanova University when it was pushing toward the 1971 Final Four.

Is there anything easier about playing 3-on-3 while in AARP’s demographic?

It is still competitive. Just ask Gately and his “Baltimore 45s,” who won a 5-on-5 national tournament in Jacksonville earlier this year. In the first game, Gately dislocated his right ankle, “snapped it back into place” and went on to MVP honors.

“I had torn all the ligaments in my right ankle,” said Gately, who recently learned that he has been nominated for inclusion in the Masters USA Basketball Hall of Fame. “It’s still swollen.”

A financial advisor, parishioner of St. Pius X in Rodgers Forge and the J.V. coach at Calvert Hall, Gately has been known for his drive since the early 1980s, when he was an All-Metro player for Mount St. Joseph High School in Irvington.

Still the No. 3 all-time scorer at Loyola University Maryland, Gately now teams with guys he used to battle in the Baltimore Catholic League, such as Marty Johnson (Cardinal Gibbons), Tim Keehan (Calvert Hall) and Phil Lazzati (Loyola Blakefield), who was also a college teammate.

What is the appeal?

Lazzati, a parishioner of Immaculate Conception, mentioned “the competition, the ability to play with guys you’ve known for 30 years, the challenge of defying the norm and hearing people say, ‘you guys can still play.’ … I actually played much better at 32 than I did at 22.”

Gately, Lazzati and company, who figure to be an even bigger age-group force once they reach age 50, occasionally compete with older Loyola U. alums, such as Kevin Robinson (Class of 1975) and Mark Rohde (’76), who teamed in Orlando last spring in the Masters Basketball Association senior nationals.

“We’re indebted to Steve Collins (’80), who keeps everyone connected,” said Rohde, a parishioner of the Catholic Community of St. Francis Xavier in Hunt Valley. “We never lost contact. The bond we have, through athletics and what Loyola instilled in us, that never goes away.”