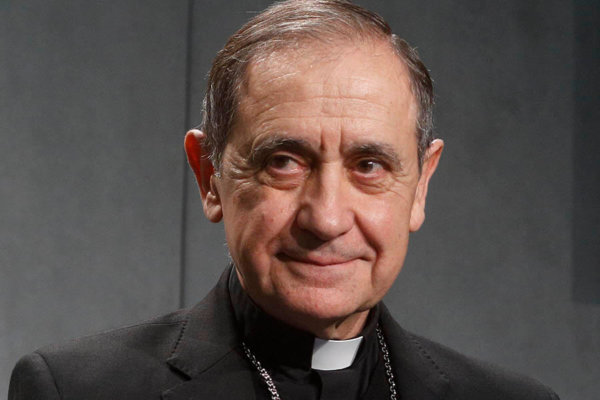 Bishop Juan Ignacio Arrieta, secretary of the Pontifical Council for Legislative Texts, attends a news conference presenting Pope Francis' new document, "Vos estis lux mundi" ("You are the light of the world") at the Vatican May 9, 2019. The document, which goes into effect June 1, contains new universal church law establishing procedures for reporting and investigating abuse within the church. (CNS Photo/Robert Duncan)

VATICAN CITY — Most Catholics have never heard of a “metropolitan archbishop,” even if their archbishop is one.

Designating an archdiocese as a “metropolitan see” is part of an organizational model, borrowed from the Romans, that goes back to the early days of Christianity, said Bishop Juan Ignacio Arrieta, secretary of the Pontifical Council for Legislative Texts.

The term “metropolitan” comes from the Greek words for “mother city,” and, Bishop Arrieta said, “as evangelization extended into a certain area,” the original diocese — the “mother” diocese — “became bound to the new dioceses that arose around it.”

Pope Francis’ universal law on dealing with sexual abuse allegations, “Vos estis lux mundi” (“You are the light of the world”) was released in early May and gives a prominent, investigative role to metropolitan bishops when one of the bishops in his province is accused of sexual abuse, possessing child pornography or covering up an abuse allegation.

At their June meeting, members of the U.S. Conference of Catholic Bishops are scheduled to discuss specifics for implementing a “metropolitan model” of holding bishops accountable.

Pope Francis’ new rules make such a model possible, Bishop Arrieta said, because the authority exercised by a metropolitan archbishop had faded over the centuries and had become mostly a vague, generic role of “keeping watch” over the suffragan dioceses surrounding his own.

The power of a metropolitan archbishop diminished over time, the bishop said, and the Second Vatican Council sealed that fate when it emphasized how all bishops are successors of the apostles and exercise their ministry and jurisdiction only in “the portions of the Lord’s flock assigned to them.”

Under the new rules, a report accusing a bishop is sent to both to the Vatican and the metropolitan archbishop of the ecclesiastical province where the person reported lives.

If it is the metropolitan archbishop who is accused or if there currently is no archbishop, the report is given to the Vatican and to the suffragan bishop who has been a bishop longest.

Still, the authority granted the metropolitan archbishop extends only to the investigative phase of the process, although he is asked to give an opinion after collecting and studying the evidence. Canon law makes it clear that judging a bishop is the prerogative of the pope. While a priest answers to his bishop, a bishop or cardinal answers only to the pope, Bishop Arrieta told Catholic News Service May 29.

The Archdiocese of Baltimore implemented a system for accountability of bishops prior to the pope’s announcement of an international policy.

Assigning a role to metropolitans in holding bishops accountable is only the latest sign that Pope Francis wants to give “greater weight to the office of metropolitan archbishop,” Bishop Arrieta said.

The first sign of that, he said, was the pope’s decision in 2015 to set aside the practice — begun by St. John Paul II more than 30 years earlier — of personally placing a pallium over the shoulders of new metropolitan archbishops named each year.

The pallium, a woolen band evoking the carrying of a sheep, “signifies the power which the metropolitan, in communion with the Roman church, has by law in his own province,” the Code of Canon Law says.

When the Vatican announced Pope Francis’ decision to bless the palliums but have them given to archbishops in their own archdioceses by the Vatican nuncio, it said the new practice would “better highlight the relationship of the metropolitan archbishops with their local churches, giving more faithful the possibility of being present for this significant rite.”

That local territorial connection is also important in handling claims of abuse, Bishop Arrieta said. Entrusting the investigation to someone who has “greater proximity to the places where the facts occurred” should be an advantage.

Some observers have raised the concern that the metropolitan archbishop probably knows the suffragan bishops well and may even have played a role in their selection since all the bishops of an ecclesial province are to meet regularly to discuss possible candidates for eventual vacancies of dioceses in their area.

Bishop Arrieta pointed out that “Vos estis lux mundi” clearly states: “The metropolitan is required to act impartially and free of conflicts of interest. If he considers himself to be in a conflict of interest or is unable to maintain the necessary impartiality to guarantee the integrity of the investigation, he is obliged to recuse himself and report the circumstance to the competent dicastery” at the Vatican.

In addition, if the metropolitan considers an allegation “manifestly unfounded,” the new law still obliges him to inform the Vatican nuncio of the allegation.

The new law, Bishop Arrieta said, provides control factors by insisting the nuncio be informed of all allegations and regularly updated on the investigation process.

“Obviously with all of these things, there are obligations,” the bishop said, and the law foresees penalties for not fulfilling them.