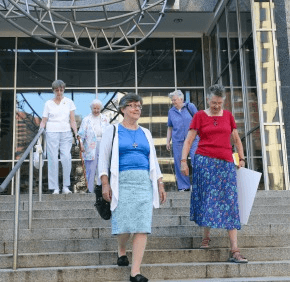 By Erik Zygmont
ezygmont@CatholicReview.org
Twitter: @ReviewErik
When religious sisters hear about women and children in any kind of trouble, they have to do something.
For five Sisters of Notre Dame de Namur from Baltimore and Washington, it was women and children being detained by Immigration and Customs Enforcement that moved them to action.
Bearing diapers, flowers and other “baby shower” gifts, the women entered the Fallon Federal Building in Baltimore Aug. 30, hoping to engage the local ICE office about the practice.
“It’s kind of a day to represent the women and children who are immigrants,” said Sister Kathleen Haughey of Baltimore.
Spearheaded by Sister Denise Curry of Washington, the local sisters’ action was part of a national “baby shower” movement, encouraged from Aug. 29 to Sept. 1 by Catholic Legal Immigration Network Inc., to protest family detention in locations in Texas and Pennsylvania.
“You know as well as I do the breaking up of families, the fear they’re under and the help they need,” said Sister Kathleen. “We just want them to know they’re not forgotten.”

Sister of Notre Dame de Namur Kathleen Haughney offers Delmy Posada and Andrea Hernandez gifts as the mother and daughter wait outside the Fallon Federal Building in Baltimore Aug. 30. The sisters were unable to leave behind donations brought to the Immigration and Customs Enforcement office as part of their campaign to raise awareness  about the detention of immigrant mothers and their children. (Kevin J. Parks/CR Staff)
The sisters were allowed entrance into the federal building, but were declined access to the seventh-floor ICE office.
Instead, an ICE staff member met them in the lobby for a brief conversation. He noted that there is no family detention in Maryland. Sister Denise said she was aware that the detention facilities were not in Maryland.
“(The staff member) was a very nice and gracious young man,” she said, “but I don’t think he really knew what we were talking about – those who cross the borders and are now in facilities and can’t leave.”
“We’re not going to drop the topic,” Sister Barbara Karl of Washington said.
Sometimes, that means keeping an open door. Sister Denise offers hospitality to young people at her home in Washington, as does Sister Ann Howard, another Washington sister who visited the federal building in Baltimore.
“The Sisters of Notre Dame de Namur are committed to helping immigrant families stay together and make their home here,” Sister Denise said.
As they left the federal building, the sisters found a young mother who happily accepted their gift of diapers.

Thinking through the issue of immigration