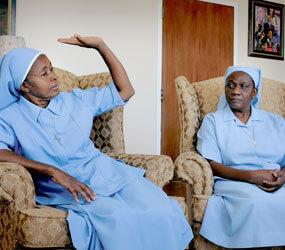 NEW ORLEANS – First came the noise, like a rush of wind. The next thing Sister Analise Jean Simon knew she was flat on the floor, with a collapsed ceiling and light bulbs pressed against her face.

She was pinned beneath the rubble of a two-story school annex building in Carrefour, Haiti, about 15 minutes from the capital of Port au Prince.

Sister Analise, a Little Sister of St. Therese, was among the fortunate victims of the Jan. 12 earthquake. After spending two days trapped inside the building, she was pulled from the rubble virtually unharmed. She had scratches on her arms and legs and bruises on her back, but she was alive and clutching a white plastic rosary when she was rescued.

At the main St. Francis de Sales School building that collapsed only a few yards away, 150 of the 350 students attending afternoon classes were killed.

“I spent all my time praying,” Sister Analise said through an interpreter at the motherhouse of the Sisters of the Holy Family in New Orleans. The motherhouse has welcomed Sister Analise and her Haitian colleague, Sister Mary Evanette Onisaire, for a one-month respite. “I was calling, ‘Jesus, Mary and Joseph, receive my soul.’ There wasn’t much hope to get out. I was praying, ‘Lord, receive my spirit.’“

Before the building collapsed, Sister Analise, 52, was typing a financial report. Falling debris apparently hit her on the head and she lost consciousness for about two minutes. When she awakened, she was in the fetal position, not able to stretch her legs more than a few inches.

She could breathe and did not have any debris directly pressing on her body. She heard people calling her name and replied, but no one could hear her from under the rubble.

“In the beginning, I didn’t know if I was going to make it,” Sister Analise told the Clarion Herald, archdiocesan newspaper of New Orleans. “I had hope that I would make it. I was praying, ‘Jesus, if it be your will, help me to come out.’ After that I started having strength and hope. There were so many people calling my name, but they couldn’t hear me.”

Volunteers digging through the rubble insisted they would not let the body of a nun sit beneath the rubble, so they continued their efforts.

“They removed the first layer of concrete and then the second layer of concrete, but I wasn’t there,” Sister Analise said. “Then someone called out and asked, ‘What is the name of the sister?’ Somebody else said, ‘Sister Analise,’ and called out my name. I answered them and they said, ‘Wait for us, we’re going to come get you out.’ Then all of a sudden I could see the nice view. I didn’t have time to think about it. All I could see was God.”

Sister Analise said her rosary, which she kept in the right pocket of her powder blue habit, gave her solace during the ordeal.

“I wasn’t thinking about food or water, I was just concentrating on praying,” she said. “Where I was, I could only think about death. I was asking God for forgiveness for my past sins, my present sins, and my sins of thought. I continued the ritual of prayer we used at the convent.”

As soon as Sister Analise emerged alive from the rubble, the sister in charge of the school was so overwhelmed “she hit her foot on a rock and cut her foot.”

When Sister Analise was told about all the students who had died, “that was another shock.” A day later, rescue workers pulled a 9-year-old girl alive from the collapsed school.

Sister Mary Evanette, 58, principal of the elementary school, said she appreciated the opportunity to take a one-month sabbatical with the Sisters of the Holy Family. Sister Evanette was in another building, taking a shower, when the earthquake hit, and that building remained intact.

“It’s going to take awhile to get these things off of our minds,” Sister Evanette said. “Right now is the first time I have been able to sleep. You can see the dark patches under my eyes. I am thinking less while I am here.”

Sister Eva Regina Martin, a congregational leader of the Sisters of the Holy Family, said she hoped more sisters from the Haitian community might be able to visit New Orleans in the coming months.

“Hopefully these two sisters can go back in the springtime and reopen their school,” Sister Eva Regina said. “They can use this time to get some medical care for themselves and heal their bodies so that they in turn can go back and minister to their people’s bodies and souls.”